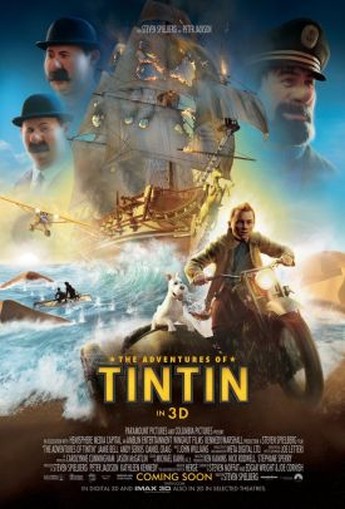 I’ve never been a fan of motion-capture animated stories: to me, animation is animation, and live-action is live-action. They both have their strengths, but they operate in different directions, that combining the media risks negating them. That’s significantly the case here, with a story that, for 90% of the time, could have been done as live-action without too much trouble [especially given the $135 million budget]. Young detective Tintin (Bell) buys a model ship, only to find it attracting a lot of attention from a variety of parties, in particular the the dubious Ivan Sakharine (Craig). Turns out that hidden within the model is part of a treasure map, which when completed will reveal the location of Red Rackham’s treasure, hundred of pounds of gold belonging to a pirate captain. The only remaining descendant is Captain Haddock (Serkis), who is also a part of the puzzle.

There’s something almost slightly creepy about something trying to look human as possible, but obviously coming up short: it’s like watching an entire movie populated by top of the range sex dolls. The shape is there, but the emotion just isn’t. It has all the hallmarks of Spielberg at his most epic, but it doesn’t have any heart – even names like Steven Moffatt and Edgar Wright on the script don’t bring much personality to the party. Bell is as forgettable, as just about everything he’s appeared in since Billy Elliott, and the rest of the cast appear to have been instructed to tone their performances down, presumably to avoid drawing attention from the shiny, pretty visuals. There is one stunning sequence: a bravura single-take chase that really does showcase why the film was done this way, for it could only have been done this way. However, that really only shows up the rest of the film, where a constantly-prowling camera is often the sole reminder that what you’ve seeing has no basis in reality.