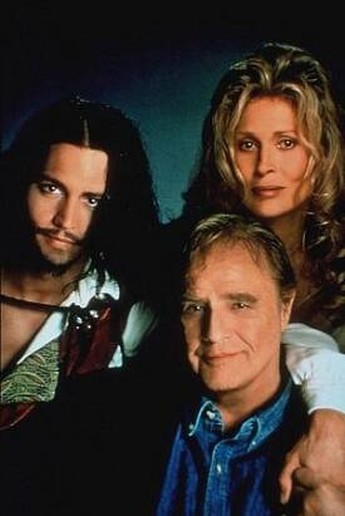 Leven must have been quaking in his shoes: his directorial debut stars Brando, whose rep as “difficult” beats any actor not buried in Klaus Kinski’s tomb. It’s also a huge gamble: this kind of cranked-to-11 romance could easily fall on its face and become merely saccharine. Yet both are handled with aplomb, albeit thanks in no small part to Depp in the title role, a man who is either the greatest lover in the world, or deluded to the point of insanity. Seeing the performance here, it’s amazing that Depp didn’t reach true stardom until Pirates, almost a decade later. You’re never quite sure whether he’s mad; his tales are so plausible that they beguile his state-appointed shrink Dr. Mickler (Brando) and make him rethink his own philosophy and relationship to his wife (Dunaway).

Much like the subsequent Big Fish, this is a hymn to the joys of imagination. Whether Don Juan describes actual events is less significant than the positive effect they have on Mickler, whose life’s meaning threatens to evaporate in his impeding retirement. But the fantastic tales he hears rejuvenate him, and you can see the weight of his many cares drop off his shoulders. It’s almost a passing of the torch from Brando – the maverick genius of his generation – to Depp, who seems equally destined for greatness. We note in passing, however, that while DeMarco claims to bring out the inner beauty in women, he only ever hooks up with hotties. 😉 Such hypocrisy barely deserves criticism, when the end-product is as charming and endearing as this. [For a very different take on a similar theme, see Crazy as Hell, also written by Leven]