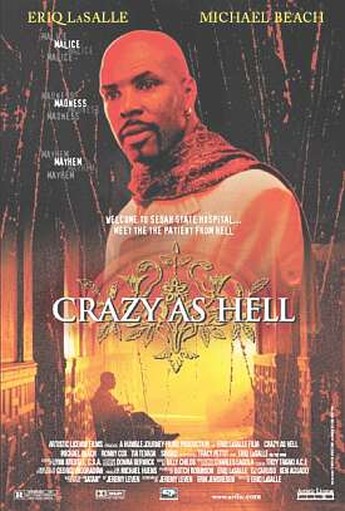 Ty Adams (Beach) is a psychiatrist with problems. Sure, he thinks he’s red-hot at his job, but that didn’t stop his daughter killing herself; he’s also just accepted a 30-day stint at a mental hospital under the unswerving eye of a documentary film crew; a new patient (La Salle) has walked in, claiming to be Satan incarnate; and there’s an orderly, clearly desperate to tell the good Doctor something… From here, things unfold and collapse, with Adams as suitable a case for treatment as half his patients. The Devil, as usual, gets all the best lines, and La Salle does a fine job of keeping uncertainty bubbling as to whether his character genuinely is Lucifer. It helps that various of his fingerprints match John Dillinger, Jeffrey Dahmer and Milli Vanilli. It’s also cool nobody mentions that both protagonists are black.

However, I’m normally no good at spotting movie twists – I went right through Jacob’s Ladder without realising he was…y’know – yet got where this was coming from half way through. This was thanks to a painfully obvious “clue” that really wasn’t necessary to the plot, and reckon this impacted my appreciation of the movie significantly. If it slides past, you’ll probably enjoy this more; otherwise, you’ll be forced to pass the time looking for more evidence, merely to prove what you already know to be true.