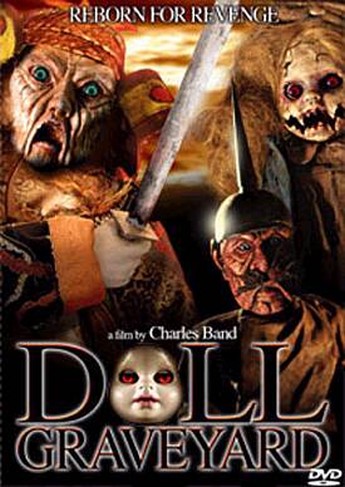 In 1911, a little girl breaks a vase while playing with her dolls; as punishment, her father makes her bury them in the back-yard, only the girl ends up dead and buried there too. 90+ years later, one doll is dug up: when it rescues its friends, it goes out for revenge on anyone nearby – which happens to be modern residents Guy (Kusnitz) and DeeDee (Gabrielle Lynn), left alone in the house by their father. The latter has invited some friends over, of both sexes; meanwhile Guy subconsciously directs the dolls to punish anyone who has been mean toward him – basically his sibling and said friends. He’s slowly being possessed by the spirit of the dead little girl, an oddly disturbing concept when you think about it.

Not that you really get a chance to think – the whole film is barely an hour, excluding a very slow credit-crawl that lasts nine minutes. So things gallop forward at a pace, and you don’t have much opportunity to think about the idiocy of, say, no-one leaving the house. The first thing I’d do, if attacked by a posse of psychopathic mannequins, is head for the streets, especially since these aren’t exactly quick-moving monsters. They’re certainly creepy looking, and vicious little ankle-biters too, which adds to the fun. Despite a surprisingly-low body count, it helps that thought went into characters and dialogue; both are a cut above the usual cliches one might expect. For example it’s amusing, given the title, when Guy pouts that his collection aren’t dolls, they’re “action figures”. I guess Action Figure Graveyard wouldn’t have sold as well…