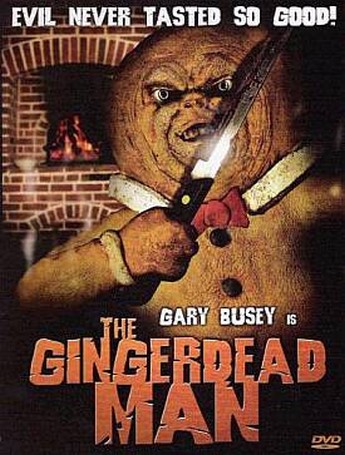 The title, concept and cover are just fabulous. I mean: an executed killer’s spirit, returns as a revengeful psychopathic cookie? Brilliant. However, the actual film comes off…ah, half-baked. Unlike Doll Cemetery, this lacks the loopy logic that made sense at the time, playing within its own rules. I think we finally cracked when Gingerdead mowed someone down with a truck – “A cookie. That can drive,” said Chris (with so much sarcastic disbelief, I fell in love with her, all over again). If the film had concentrated on the mayhem caused by said murderous confection, it could still have worked. Or even if it had interesting or engaging human characters, to occupy the time between the ginger snaps. No such luck. Instead, there’s lame subplots about a struggling bakery run by Sarah (Sydney), a rival chain, its owner’s bitchy daugher (Aleman), a colleague who wants to be a pro-wrestler, and an unnecessary love-triangle too.

It’d help if the script covered all the bases, like the apparently necessary fluke of blood getting into the dough – hello, health department violation – or why people don’t simply leave the bakery. [A vague booby-trap explanation, which provides 1/3 of the film’s body-count, doesn’t really make much sense. Since it’s now set off, why not use the door?] I understand perfectly why, for budgetary reasons, they skimped on the monster, but a well-thought out story doesn’t cost more to make. I don’t really see the need for Busey, and wonder what budget percentage went to him. I mean, how many people will think, “The Gingerdead Man. You gotta be fuc…hang on – Gary Busey! Oscar-nominated in 1979 for The Buddy Holly Story. Here is my hard-earned cash, Mr. Video Store Clerk.” The concept should be the star here – when it is, this film is great; otherwise…less so.