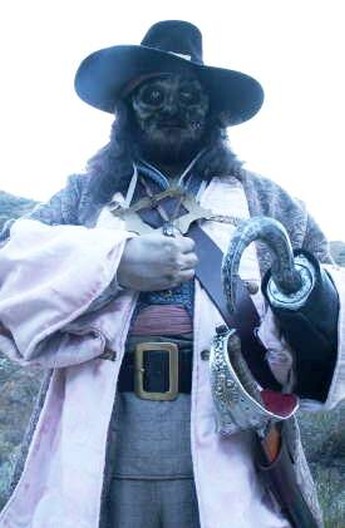 This is, I think, the driest pirate movie ever made – it’s as if they filmed Pirates of the Caribbean in Switzerland. Yet, despite the lack of, er, water, this is a brisk and enjoyable piece of utter nonsense: the titular buccaneer slices ‘n’ dices his way through a selection of co-eds, descended from those who killed him 250-odd years ago, as they threaten to take his stash of treasure. The blood flows in copious quantities, at least occasionally – a couple of deaths are disappointingly “get poked and fall over”, but others appear to use buckets, literally, of gore – and Syn DeVil supplies the skin, including an odd scene where she gets her feet tickled, topless, by one of her teachers. [I expect a million hits on this review from “tickled topless” going into Google] Mind you, another professor is played by Ron Jeremy, so this is not your normal college campus.

This is clearly made on a small budget, with the costumes looking more Halloween party than period; the swordfights are dire, though that’s a minor issue at worst. Just as obviously, half the film is shot in someone’s back garden, offering, shall we say, a “limited” stand-in for the middle of the desert. There is also one of the most blatant continuity gaffes ever: in one shot, a character is wearing a bikini, the very next, it’s a T-shirt. However, the shot after that, she dies in a most impressive manner, so we’ll cut the makers slack there too. Toles, as Pirate Death, looks suitably decayed, while attacking his part with particular relish, and generally, most of the cast do the job. I can’t help thinking that they could have done more, as shown by one lovely scene where the late freebooter is confused by the modern concept of a “swimming-pool”. However, for what this is – B-horror, with few pretensions at anything else – it’s absolutely fine.