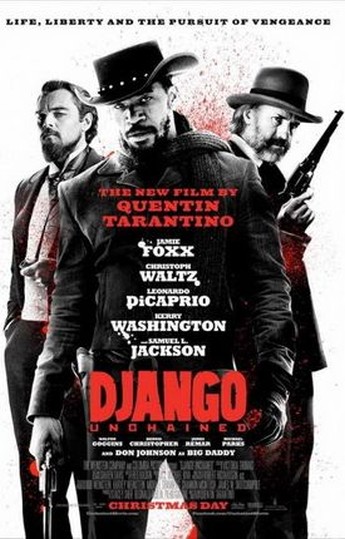 Maybe Tarantino would have been happier if he’d been born black. It would, after all, allow him to use his favourite word with much greater ease, instead of having to go to the trouble of re-creating pre-Civil War America, in order to work it into his movies. We started off playing a drinking game: take a shot every time anyone uses the word “nigger.” But before long, we had to switch to enthusiastic mime drinking, simply because it shows up so freakin’ often. Historically accurate? Possibly. But I’m pretty much of the belief that the less you use offensive language, the better – because it then has much more impact when you do. Anyway, this is another of Tarantino’s genre mash-ups, this time combining spaghetti Westerns with blaxploitation flicks, such as Fred Williamson’s Boss Nigger, also about a black bounty-hunter.

The hero here is Django (Foxx), a slave freed from his captors by Dr. King Schultz (Waltz), already a bounty-hunter, who needs help identifying three targets. Django shows a talent for the profession, and the pair team up for the winter, with the agreement that in the spring, Schultz will help Django locate his wife, Broomhilda Von Shaft (!!) – the pair were sold off separately, after a failed attempt to run away. She is located on the estate of Calvin J. Candie (DiCaprio) who, in addition to being a regular, cruel slave owner, enjoys watching his property fight to the death, or if they refuse, get torn apart by dogs. The pair embark on a plan to liberate Broomhilda from Candie, but their deception is uncovered, and Candie is less than pleased by it. Can Django – with the help of dynamite and, apparently a time-machine, since dynamite was not invented until after the Civil War – kill Evil Whitey and rescue his woman?

Like most Tarantino films, it’s a lot less entertaining if you’re familiar with the material he’s ripping off, and I’ve seen enough here not to be impressed. As well as the previous elements, you can lob in Spartacus; the cable TV show, not the movie, with which is shares the “slave seeking wife” storyline, and a hyper-enthusiastic approach to blood. Franco Nero, who shows up here in a cameo, was a much more imposing figure than Foxx, and it’s notable that the film is much less interesting when Waltz isn’t on the screen. Which (and this is probably a spoiler, but I don’t really care) is for the film’s entire climax. Up until then, it’s not exactly dull, and despite the usual over-extended running-time, does hold the interest reasonably well. However, the shrill shrieking – literally, every white American in the movie is a buffonish caricature – reduced proceedings to that of a poorly-written pantomime. They should have done it Spike Lee style, had DiCaprio blackface up to play Django, with Foxx as the sadistic plantation owner. Now, that would be a real movie…