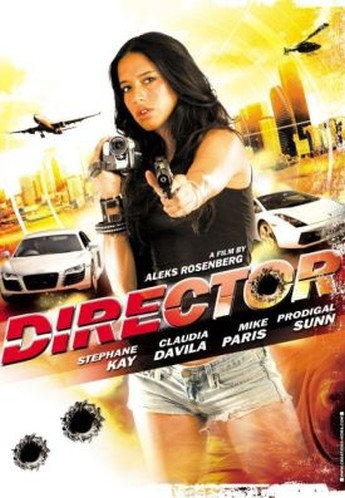 Adriana (Davila) is a Venezuelan stripper who wants to be a film-director [I’ll pause for your derisive snort here] Forced to leave the country after rejecting a VIP, she ends up in Miami. There, she gets a job filming what she’s told is a mockumentary, a prank involving a jewellery store heist carried out by French brothers J.R and Mark (Kay + Paris), plus Bull (Sunn). Except, the robbery is very real: while initially shocked, Adriana realizes this could be her ticket to fame and fortune, after she sees how the media pounces on the footage she shot. She also hooks up with J.R., though this leads to friction within the gang, between her and his sibling. Meanwhile, the police get a lucky break, after a cop’s sister has an encounter with one of the robbers, and the net begins to close. One last robbery is planned, after which everyone will go their separate ways, retiring with their ill-gotten gains. Or will they?

In some ways, this feels like a large-scale vanity project for someone. The production values are pretty high, with no shortage of swanky motors, locations and helicopter shots, in and around Miami, to the extent that it feels like Burn Notice: Cribs. Where this falls down is partly in the performances, which are generally amateur, at best, but particularly a script which simply doesn’t have enough going on to justify the running-time. Far too many scenes are there simply for padding: the last time I saw so many shots of cars moving around Miami, was when our son was heavily into playing Driver. It’s an interesting idea, in an era when reality stars exist for doing just about anything [illegal or not, as the Discovery series Moonshiners illustrates]. However, little of the potential is realized, instead we get dated references to posting videos on – get this – MySpace. I know this is a couple of years old, but… Really?

Things do perk up somewhat in the final reel, with a gun-battle when the final robbery goes wrong, that is actually reasonably well-shot and edited, and has more, apparently real, Dade County cop cars present than I certainly expected. However, I’m fairly sure that, under those circumstances, the cops would not allow you to drive away, unmolested, in the car which dropped off the perps, as depicted here. Whatever. Probably the most memorable scene comes in the credit out-takes, when the production car, in which the gang are rolling with their (I’m hoping!) fake weapons, gets pulled over by an understandably very nervous genuine cop. Deadpans Sunn, “It’s because I’m black, isn’t it?” You do get the sense this was probably fun to make: however, for the disinterested observer, not nearly as much.