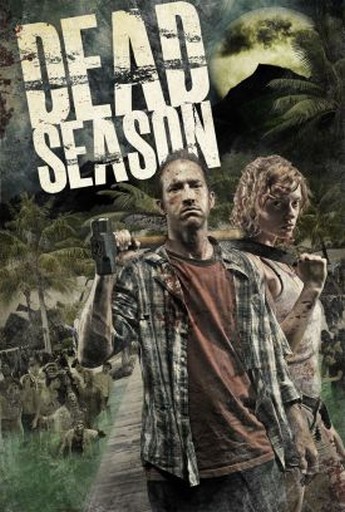 Elvis (Peat) meets Tweeter (Merrill) when she is breaking in to steal his supplies, in a post-zombie apocalyptic world. They team up, because Elvis had a lead on a boat, which can take them to an island that’s supposedly free of the walking dead. Arriving there, they find it run by Kurt Conrad (Burns), a strict military type, who takes a very pragmatic approach to survival, insisting that everyone in the community must be able to contribute, whether it’s dealing with the zombies that are coming ashore from a grounded cruise-ship down the coast, or….well, whatever. Fortunately, Elvis was an EMT before civilization collapsed, so uses that as his “in.” While he may be relatively content – it’s a lot better than outrunning zombies every day – Tweeter finds something more than a little off about Conrad, such as the way he keeps his daughter (Wilson) permanently under lock and key. And where, exactly, are they managing to get fresh meat, given the island in question is known to all to be badly contaminated by military testing?

This starts off well enough, and the limited cast and resources are kept largely out of sight, or at least don’t prove too much of a distraction. There’s a satisfactorily grim atmosphere generated, which probably reaches its peak with a decision on the boat as they’re sailing towards the island – it had Chris muttering, “That’s hardcore” under her breath. However, once they are integrated into the new community, the film appears content to do little more than trot out the usual cliches of zombiedom: you just know, that when there is any community overseen by a military type, that he (for inevitably it is a he) is going to end up being barking mad. There’s no surprise when this comes to pass, and the last chunk of the film is largely spent with a great deal of running around, after the zombies inexplicably decide to mount a mass assault on the compound, at the moment most appropriate for plot reasons. It’s a disappointing end to a movie that promised a great deal more in the early running.