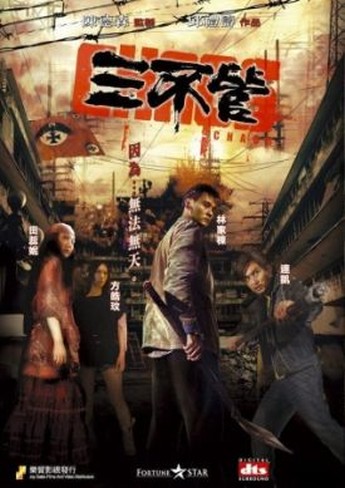 In a dystopian future, where half the population are now prisoners, large sections of the city have been turned into jails. While taking prisoner Tai Ho (Lam) back to headquarters, cop Mickey (Lin) is involved in a crash which leaves them stranded in one of those prisons, now overseen by the devilish Crow, who has no fondness for the police: unable to decide which is cop and which felon, he pits them against each other in a fight to the death. However, the brawl spills over in to Crow’s birthday, when no blood can be shed, and is put on hiatus after a resident Ling (Tin) says she knows Mickey and vouches for him. The truth is, she and her daughter Yan (Fong) were abandoned by Tai Ho and wants to see him pay for that, so she agrees to help Mickey if he takes them with him back to what passes for civilization. Just to make things even more dangerous, a plague, spread by infected blood has broken out, and authorities are planning brutal measures to ensure it doesn’t go any further.

No shortage of stuff going on, to be sure, but instead of showcasing that, the film manages to make it all seem pretty dull, and certainly more talky than expected. I was hoping for something like Escape From New York, much more action-oriented, but (perhaps for budgetary reasons, which certainly seem to hamper proceedings), the film doesn’t get there until almost the end, and even when it does, the results are not exactly memorable. As you’d expect from a director of his past record, Yau doesn’t skimp on the violence – Crow uses exploding collars and the slicing of Achilles tendons to keep his fiefdom in check – but unlike previously, there’s little or no emotional impact. Yan, in particular, comes off as a whiny teenage brat, and it’s also such a dark movie, we often found ourselves peering into the murk, as we tried to figure out what was going on. There are occasional moments when this does feel like it’s going to go somewhere interesting. Don’t be fooled. It doesn’t, remaining instead a largely muddled, underlit mess.