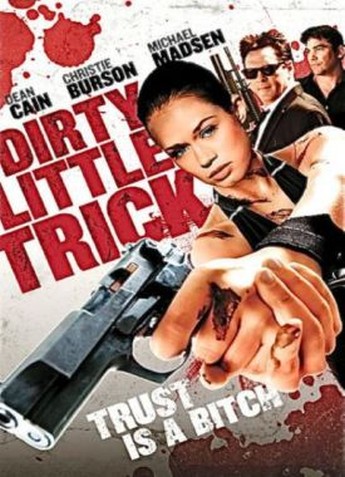 A moral tale about the dangers of picking up hitch-hikers, even attractive young female ones. That’s what Michael (Cain) does, collecting Sarah (Burson) off a remote desert road, after what she claims to be a fight with her boyfriend. Seeking somewhere safe, he takes her to his apartment, which he shared with his fortunately-absent sister: the inevitable sex ensues, only for Sarah to reveal the next morning that she’s not of legal age. He drops her off at the bus-station and buys her a ticket back to Chicago, only to spot that she doesn’t get on board. Worse is to follow, for after returning home, he receives a visit from the police, who received an “anonymous” tip and discover a key to a strong-box, which leaves Michael with some ‘xplaining to do. Turns out Sarah – or, more accurately, “Sarah” – has dragged him into her plot, which involves pulling the wool over not just him, but several other men, and using them in a plan to swipe a large stash of mob money, skimmed off the top by Danny (Jones), one of those who have been drawn in to her web of lies.

The film leaps back and forth in time, showing partly how Sarah got to the point where she’s standing in the desert, and partly how Michael unravels things going forward. Both Burson and Cain are good fits for the role, but the movie collapses with a horrid plothole late on, through which you could drive a herd of elephants, unless you believe organized criminals are really, really stupid. It basically derails the entire film, leaving me with the sense the makers reckon the viewer is as dumb as the gangsters, who are led by Michael Madsen, doing his usual Michael Madsen schtick. It was shot here in Phoenix, though there’s not much local flavour resulting, things operating largeless in the characterless suburbs and strip-malls, that could be LA or anywhere in the South-West. The makers also seem to forget that if you say “Monroe and 3rd” to a Phoenician, the immediate response is “Street or Avenue?” since we have both. Between that and the other niggling flaws, it’s proof that even if you do the big things right, the little things matters as well.