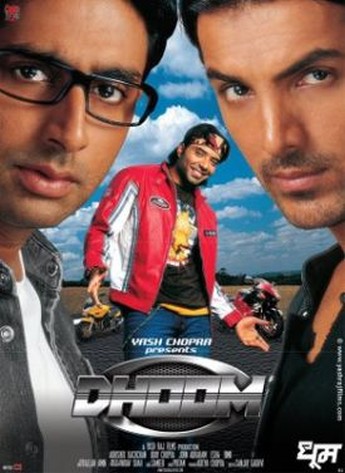 Been a while since we’ve watched a Bollywood film: somewhat surprised to find this on Netflix streaming (even with subtitles that mirror the worse of HK in its heyday – at one point the English line “That is our philosophy” becomes “Let’s reduce our velocity”!), but it’s nice to be reminded of the strengths and weaknesses of the genre. This hits the ground singing, with a musical number between the lead, police detective ACP Jai Dixit (Bachchan) and his other half. Well, at least that gets it out of the way early, so it can hardly be claimed that it takes you out of the movie. The film then settles in for the long haul and the plot, which concerns Dixit’s efforts to catch a daring gang of motorcycle robbers, led by Kabir (Abraham); the cop believes that motorcycle mechanic and racer Ali (Chopra) is involved, so targets him. When he eventually realizes Ali is innocent, he still uses him as an undercover operative. Meanwhile, Kabir taunts Dixit and bets him that he won’t be able to catch the gang, even if he is told exactly where and when the gang’s next hit takes place. And, beyond that, Kabir is already looking towards a big score that will allow them to split up and retire forever.

As usual, this is all over the place, with elements of action, comedy, romance and, of course, songs. Let’s take these in order. The action is mostly the heists and resulting chases, though these are clearly not occuring at the 300+ km/hour claimed. The best is likely the finale, where Dixit and Ali use a motorboat to chase the gang’s juggernaut, eventually lassoing it with a grappling iron, so the boat is being dragged along the highway. It is, of course, completely, ludicrous, but kinda fun. The same goes for the comedy, which is at the usual level of furious mugging, mostly from Chopra, who is obsessed with finding a woman to please “Mummy” in heaven: however, I’ll admit, I laughed on occasion. Naturally, everyone on both sides of the law is young and photogenic, allowing for plenty of doe-eyes and the usual gender roles [they do make one of the gang female, but really, might as well not have bothered], and aside from the first, the songs aren’t too irritating, though admittedly, I was in the bathroom. A serviceable and entertaining entry in the genre, suitable for beginners.