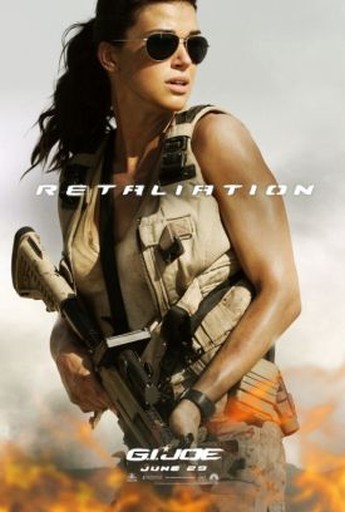 If you remember, at the end of the first film, the President (Pryce) was kidnsapped and replaced by the evil Zartan, using nanobot technology to become a flawless doppelganger. That’s the thrust of the second film, as he unleashes his plan for world domination, getting all the other nuclear powers to destroy their weapons after a show of brinkmanship, and then use a previously-undisclosed “Rods from God” weapon to enforce their compliance [sorry, London. You get to be the target for that one] Simultaneously, he replaces the Joes with the COBRAs loyal to him, by framing the Joes for the assassination of the Pakistani PM, and calling in an air-strike that all but wipes them out. Keywords there are “all but”, for there are three survivors: code-names Roadblock (Johnson), Flint (Cotrona) and Lady Jaye (Palicki). No longer with unlimited resource, the trio have to figure out how to rescue the real President, and stop the fake one from taking over the world.

I thoroughly enjoyed the first film, finding it an enjoyably guilty pleasure, and the second is little or no different, a pleasant surprise, as I feared the worst after its released was delayed for nine months. Instead, it’s more or less what you would expect from a movie based on a series of kids’ toys: brightly-painted and perpetually in motion, yet it actually has some style and surprising political substance, rather than using made-up countries (indeed, it was banned in Pakistan, for its depiction of that country). The style is particularly apparent during a gorgeous battle that takes place down the side of a mountain: it’s my favourite action sequence of the year (even after seeing Pacific Rim), and it made sense when I discovered director Chu cut his teeth directing dance movies like Step Up 2: The Streets, for this has a near-balletic grace. I will admit, not all of it makes sense, and there is at least one sub-plot too many – possibly more than that – so it’d work better at the original 110 minutes, than the 123 in this “director’s cut.” 90 might be better still. But I’ll take 90 minutes of enjoyable stuff in a two-hour action film, every day and twice on Sunday.