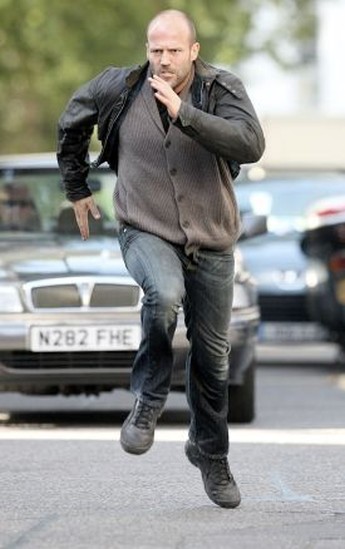 Jason Statham in a Jason Statham movie, starring Jason Statham as Jason Statham. And, did we mention, it’s got Jason Statham in it? Really, if you don’t enjoy watching Statham do his usual “tough guy treading the line between law and crime” thing, you should run screaming from this movie, because that’s largely what you get here. He plays Detective Sergeant Tom Brant, a copper infamous in Sarf London for his brusque treatment of those who break the law. When a killer, Barry Weiss (Gillen), starts shooting fellow officers in the head, Brant teams up with a recent transfer to the station, Sgt Porter Nash (Considine), who was harassed out of his previous post due to his homosexuality. As the case develops, it turns out that Weiss is taking out any policeman he considers to have “wronged” him by arresting him, and the list included Brant, who gave him a serious arse-kicking after an incident in a local billiards’ hall. Brant and Nash arrest Weiss, but the evidence is flimsy, and the suspect has to be released, mocking the police as he goes to freedom.

Needless to say, neither officer are exactly impressed, and come up with a plan to deal with Weiss, that probably counts as “crypto-fascist” at least. The results are more or less mind-numbing in their predictability, but enlivened by decent performances, that provide depth and freshness to the characters that isn’t offered by the script. This is certainly the kind of role that Statham could do in his sleep, but to his credit, he delivers with his usual energy, and there’s good support from Considine, and Morrisey as a journalist who will happily pander to the killer for the sake of circulation. They help put over some nice moments, such as Brant falling asleep as Nash pours his heart out, and combine with some solidly constructed moments of action, set in and around my old stomping grounds [not that I recognized anywhere specific; hey, it’s close to a dozen years now since I was anywhere south of the river]. It has certainly acquired additional resonance, in a London where psychos can slaughter a soldier in broad daylight, on a busy street, but any such thoughts are clearly accidental: still, as brainless entertainment goes, this… Goes.