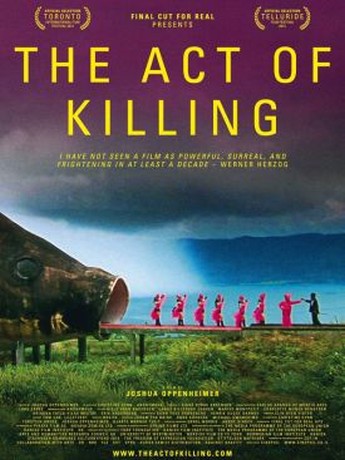 In the mid-60’s, Indonesia embarked on an anti-Communist frenzy that made McCarthyism look like a tea-party, with death squads killing Communists, those suspected of being Communists – or, to be honest, anyone they liked. It’s estimated that over two million died in the violence. Almost 50 years later, those who carried out the killings have not been brought to trial: indeed, some are still in positions of power, and revered for their work protecting the country. Director Oppenheimer talks to men like Congo and Koto, who are entirely open about both the general details of their actions at the time, and the specifics; Congo estimates he probably killed about a thousand people, mostly by strangling them with wire, because that proved less messy than bludgeoning. Oppenheimer gives his subjects the chance to make a feature film, like the gangster ones which inspired them growing up, to tell their side of the story and re-stage their actions. However, when Congo is placed in a situation like that experienced by the victims, the feeling of guilt he has happily suppressed for decades come bubbling to the surface.

This is an infuriating documentary, which occasionally is jaw-dropping, yet is also too loosely-focused and meandering, particularly in the 159-minute director’s cut reviewed here (the theatrical version is 44 minutes shorter, which seems like a pretty good idea to me). The former is seen in the way it depicts Indonesia, and particularly its politics: Koto has aspirations to become an MP, cheerfully admitting he wants this, simply so he can collect bribes. Other, more established politicians are similarly forthright, praising gangsters for their patriotism. But both Congo and Koto hardly come over as psychopaths: the former is avuncular while the latter has a strange fondness for dressing in women’s clothes; Pardede, however, still seems like a menace to society. Less successful are the re-enactments, or the film they are supposed to be trying to make, which are given no context and serve little point in the finished feature. The main lesson I take away, is that history is written by the winners: while driven home with undeniable venom here, it’s hardly an earth-shattering revelation.