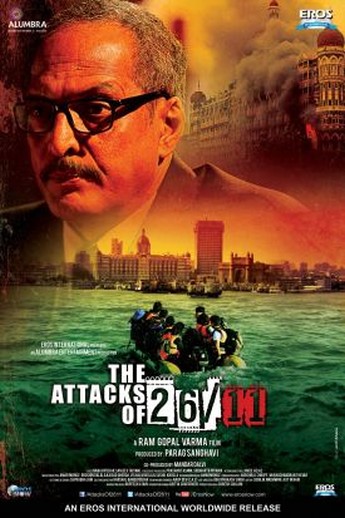 In 2008, groups comprising a total of ten Islamic terrorists, out of Pakistan, staged a series of attacks over four days in Mumbai, killing 166 people. This film depicts some of the events, focusing on those involving Ajmal Kasab (Jaiswal), the sole member of the group to be captured alive, as seen through the eyes of Joint Commissioner of Police, Rakesh Maria (Patekar), as he testifies before a commission investigating the attacks. This covers the gang’s arrival in Mumbai, and their attacks on a cafe, hotel, train station and hospital, before leaping forward to Kasab’s capture, interrogation by Maria and eventual execution, late last year.

It’s not your “typical” Bollywood film, thankfully not needing to shoehorn any dance numbers in there, and is all the better for it. Despite a carefully-worded disclaimer at the start, that this isn’t intended to criticize any particular religion or group, there’s absolutely no doubt who the villains are, with Kasab and the rest of the terrorists portrayed as emotionally-dead, brainwashed psychopaths. In contrast, Maria is the sole emotional point of contact for the audience. In most cases, that might be a problem, but both leads are excellent, with Patekar delivering his report with the perfect mix of detached efficiency, barely covering a seething layer of hatred for the perpetrators, that finally breaks through in a blistering tirade, after Kasab demands to be re-united with his colleagues, not realizing where they are.

After somewhat wobbly early going, the film really hits its stride during the attacks on the hotel and train station, which are extremely well-staged, and just brutal to watch. The camera prowls around behind the terrorists, helping to create a sense of inescapable menace which is highly effective. Indeed, it’s a shame that the film basically ignores the later events, with special forces storming the Taj Hotel to take out the survivors, where they’re holed-up, which would have made an impressive finale. Instead, what you get is a fairly one-sided argument against terrorism: while morally sound, it’d perhaps be more interesting if Kasab had been shown as any kind of intellectual match for Maria, rather than a sullen teenager who sits there as he’s lectured by Dad. Still, these are minor quibbles, not significantly derailing a very solid and engaging piece of work, shining light on an incident not as well-known in the West as it should be.