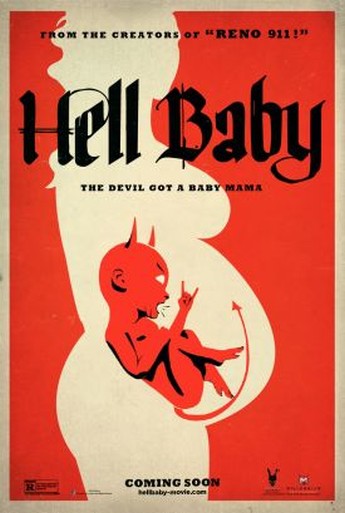 Jack (Corddry) and his heavily-pregnant wife Vanessa (Bibb) move into their new home, in what could politely be called a “rundown” part of New Orleans. However, it’s not long before odd things start happening, and Vanessa’s behaviour becomes odd. That’s “odd” as in, crucifying their psychiatrist on the wall of his office odd, not to mention her new fondness for an after-dinner glass of paint-thinner. Their overly-attached neighbor (Key) tries to help, pointing out that there haven’t been many deaths in the house very recently, as does Vanessa’s sister, a practicing Wiccan who delivers most of her lines nekkid [or maybe it just seemed that way?] but it’s only when an expert from the Vatican, Father Sebastian (Garant) shows up, investigating the psychiatrist’s death, that all the pieces fit together, and Jack realizes that his wife, somehow, is carrying the spawn of Satan.

Horror-comedy is a difficult genre to get right: it’s distinct and separate from the pure spoofs like Scary Movie, which are generally only comedic, with little or no actual horror content. There’s a spectrum from there back, with the humourous elements decreasing: more often than not, one side works better than the other, although there’s a sweet-spot, very rarely found, but best occupied by Shaun of the Dead, where both aspects succeed completely. I mention all this, because it gives an insight into what works here and what doesn’t. This has elements that are certainly played for straight-up horror, and it’s clear the makers have seen, and have a certain fondness for, the genre classics. However, this is more a comedy played out against a backdrop of horror elements.