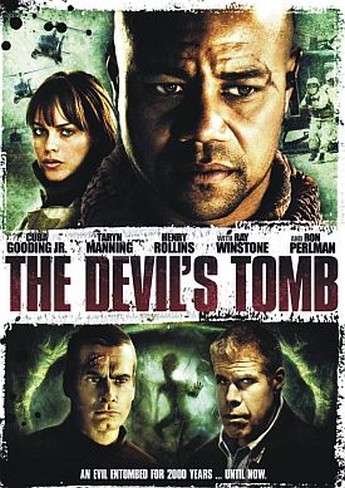 I never really had Gooding as a ringer for Sigourney Weaver, but there are more than enough similarities between this and Aliens to make me wonder. It centers on a team of marines ordered to accompany a civilian to a remote “research facility” after communications with it have been cut off. On arrival, they find the place almost deserted, but it isn’t long before they discover the facility contains something far more deadly than they were prepared to encounter. I mean, one of the soldiers is even called Hicks, f’heavens’ sake, and some of the dialogue is also…strangely familiar, shall we say. The main difference is a lot of religious overtones, as it turns out that what has been uncovered, deep in the bowels of the Middle Eastern desert is fallen angel, capable of taking many forms to seduce its victims, with its goal to escape into the outside world from where it has been sealed for thousands of years.

Outside of Gooding, there are a fair number of known names, buried almost as deep in the cast, as the complex is in the sand, though none of them get much to do, although there’s at least one who gets to go strongly against type [let’s just say, the last guy you’d expect to play a priest]. Connery appears to be carving out a niche for himself in this kind of straight-to-video action flicks, but outside of the supporting actors, there’s not much here to lift this above other genre entries: some of the effects are occasionally quite messy. As noted, it feels like it should perhaps have been titled Aliens and Demons, and trying to ape a far, far better movie is rarely a good idea. Given the names Connery talked into appearing here, it’s a shame they weren’t put to use in a storyline worthy of their talents, or at least not one that feels like it’s cobbled together out of the director’s DVD collection.