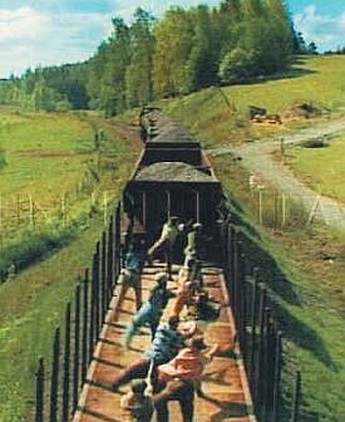 This is one of those films which people either love or hate, and there’s not much middle-ground. Chris can’t watch it at all, though this is more for the hand-held camera triggering her motion sickness (see the footnote at the end). That aside, there are plenty of people who condemn this for mawkish sentimentality, pretentiousness and absurdity. I can’t argue with such a viewpoint; I just can’t share it either, because for me, it works. It’s a really risky proposition, not just using a non-professional like Bjork in the lead, but asking her to play the role of Selma, a Czech immigrant, rapidly losing her sight, who is desperate to pay for an operation so her son doesn’t have to endure the same fate. It would tax far more well-established actors, and is a testament to both Bjork and Von Trier, that the raw performance which results, comes over as completely natural at times, this feels more like a documentary on working-class life than a musical.

For, make no mistake, that’s what it is. The rhythms of the machinery in the factory where she works long hours at dangerous equipment, a passing train, or a record-player stuck on the final groove, all trigger music in Selma’s head, acted out in musical numbers that are much better integrated than the classic films she watches at the local cinema. “In a musical, nothing dreadful ever happens,” says Selma at one point; that certainly isn’t the case here, where she loses her sight, job, role in a local production of The Sound of Music and operation fund in short order. And things go downhill from there, until an ending that is as good an argument against capital punishment as anything ever put on a screen. Certainly, it’s a film you have to buy into completely: if you don’t, then the criticisms mentioned previously will likely apply. However, if you do – and I did – you’ll find it a powerful, imaginative piece of cinema, unlike anything else you’ve ever seen.

[Caution: if the shaky-cam work in Blair Witch made you motion-sick, be very careful… Here’s Chris’s report: “Fifteen minutes into it, I had to literally run out of the theatre and into the bathroom to throw up all over the place. I felt horrible. I washed my face and brushed my teeth and my head would not stop reeling. I drank some water and contemplated going back in but couldn’t, not even to get my sister out of there. Eventually she came out to see if I was ok and three other women had come out of there with the same problem.” You have been warned…]