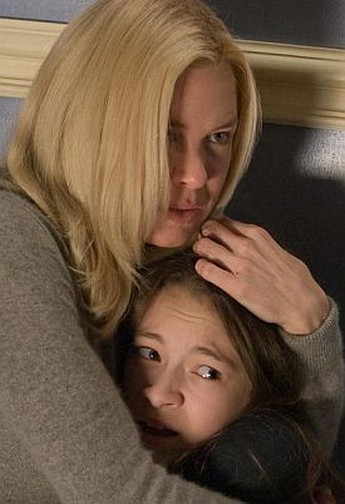 While undoubtedly silly, this horror pot-boiler did the job for us, though it may depend on how you react to the equating of a teenage girl with a demonic entity. Having raised one, I can safely say it’s an unfair comparison…to the demonic entity. Here, overworked social worker Emily Jenkins (Zellwegger) is handed the case of Lilith (Ferland), and soon suspects the young girl of being abused by her very weird parents. A midnight call from Lilith brings Emily and cop friend Detective Barron (McShane) to her house, where she finds said parents trying to stuff their daughter into the oven. Okayyyyy… Lilith is taken into care, and Emily ends up acting as a temporary foster-parent while a more permanent arrangement is found. Initially, things go well, but then people around her start behaving strangely – another kid in her group therapy session kills both his parents with a tyre-iron, and Barron tells Emily there was a 2am phone-call to the culprit from her house. Lilith denies all knowledge, but this is just the first in the series of increasingly unpleasant occurrences, which might also explain why her parents had multiple deadbolts on the inside of their bedroom door…

Shot four years ago, originally scheduled for release in early 2008, and getting scathing reviews, we still enjoyed this, mostly thanks to Ferland’s performance, which can go from innocent to utterly menacing in the turn of a sentence. In particular, there’s one conversation with a counsellor (Cooper), that is just brilliantly chilling. You just know what’s going to happen as a result of it, and if you are the slightest bit phobic about wasps [raises hand!], it isn’t pretty, even if the CGI seems a bit shaky by today’s standards. Of course, Emily is frustratingly naive, taking about an hour longer than the audience to realize what she’s let herself in for, though this is a conceit necessary to the plot, and to be fair, her social worker training doesn’t prepare her for this kind of thing. I’d like to have seen Barron’s religious leanings come into play a bit more; it’s an aspect that’s mentioned, just never developed, and would certainly have fitted in with the rest of the film. That’s a minor quibble: if not especially cinematic, this pushed all the right buttons for us not to feel cheated.