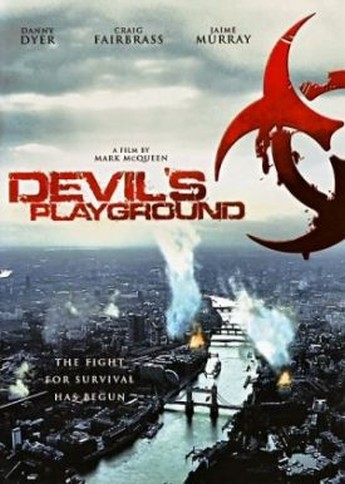 Drug tests by pharmaceutical corporation N-Gen go horribly wrong, with all but one of the test subjects developing strength, speed and an appetite for human flesh. The one who didn’t – and who may be the key to stopping the epidemic which is now spreading through the British population – is Angela (Buring). The company send their top enforcer, Cole (Fairbrass), to bring Angela back, so they can find out why she has remained immune; it’s a task that Cole has a deep, personal interest in, since he has been infected, and only a dwindling supply of temporary antidote is keeping him from going the same way. However, Angela has other plans, and is intent on making her way through the carnage to a heliport in East London, from where she can make an escape. Her ex-boyfriend, cop Joe (Dyer), has just been released on bail from jail, and is also part of the chaos.

While hardly innovative, it doesn’t exactly have any pretensions in this area, and delivers what you’d expect with some degree of pace and invention. There isn’t too much money available – the activity in the background clearly doesn’t show a city teetering on the edge of complete collapse! – but they’ve spent what they have in the right places, with some impressive bits of gore, and generally decent make-up and effects. A nice twist is that, because the drug being tested is performance-enhancing, the zombies all turn into parkour experts. Or something. It’s kinda vague on the details. The main problem here is, when the characters are not actively fighting for their survival, they are almost entirely irritating, to the extent that you pray for them to be eaten, since it’ll shut them up. Fortunately, the mortality level is more than acceptable, and a generally brisk pace helps this deliver on its premise, and if the obvious limitations aren’t exactly overcome, they’re easy enough to ignore.