Man, how Schumacher has fallen. From doing a 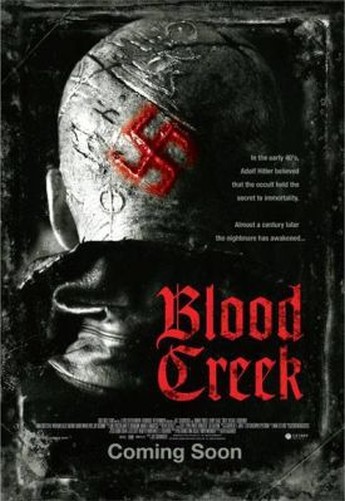 Batman movie to this, which is basically straight-to-video horror schlock with an entirely generic title. I mean, there is no river prominently present here, and particularly not one full of bodily fluids: I think I’d have remembered that. Probably more than much of this. It starts off well enough, with Nazi scientist Wirth (Fassbender) arriving, pre-WW2, on a West Virginia farm, where a runestone with mystical powers was recently unearthed. Three generations later, Victor Marshall (Purcell) returns, after vanishing on a hunting trip. He recruits his brother Evan (Cavill) for a trip to that farm where he was held – whose inhabitants appear frozen in age for some reason. And what, exactly, is being kept in the heavily-secured cellar?

I do respect Schumacher for having bounced all over the genre map, from Batman and Robin through Falling Down to Phantom of the Opera. But there’s not much here that will stand in your mind: its standard fare, right from the way that the evil has a vulnerability that’s neither too easy to find, nor too hard, and with a villain which conveniently occupies just the right ground between threatening and invincible. It’s the kind of convenient, slack plotting more appropriate for that straight-to-video horror schlock mentioned above, and I don’t think I could take it seriously from the moment the movie re-animated a horse in order to send it into the house and bite people. There are occasionally moments of flair, and the performances are slightly better than the material deserves, as you’d expect from a fairly well-known cast. However, overall, the movie is as forgettable as its title.