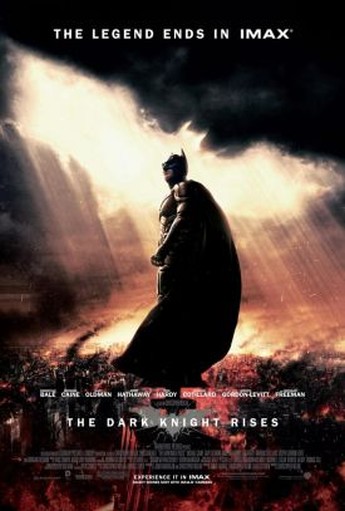 The trilogy is completed, and is…satisfactory, rather than providing quite the hoped-for knock ’em dead conclusion. It takes place in an initially quiet Gotham, which no longer appears to need Batman, and Bruce Wayne (Bale) has become a reclusive hermit. However, that lasts only until the arrival of Bane (Hardy), who starts a reign of terror in Gotham City: when he launches an assault on the Stock Exchange, in order to target Wayne’s wealth, it becomes clear that there is a personal aspect, though Bane widens his campaign to target other members of the “1%” and their accumulated wealth. When his plan reaches its eventual goal, there are few left to stand in his way – basically, Commissioner Gordon (Oldman) and former patrol officer John Blake (Gordon-Levitt), whom Gordon promoted to detective. And what of Bruce Wayne? Well, he is not quite available right now, but if you’d care to leave a message?

The main problem, I think, is the lack of a really good villain. Hardy just isn’t up to the level of Ledger – though it’s hard to think of anyone who would be – and with his mask and distorted voice, he sometimes sounds like a bad Halloween costune version of the Dark Knight. He does have more of a motive, but I’m not sure that’s necessarily a good thing: the Joker’s “some men just want to watch the world burn” was all the more chilling because of its absolute nihilism. You can’t argue with that kind of thinking. Technically, it’s excellent, but it lack the emotional heart which drove its predecessor, and there isn’t anything like the same degree moral dilemma which was another important factor. At 165 minutes, it’s the longest of the trilogy, and I have to say, it certainly seems that way. If no Godfather III, it’s no Return of the King either: good enough, yet vaguely disappointing.