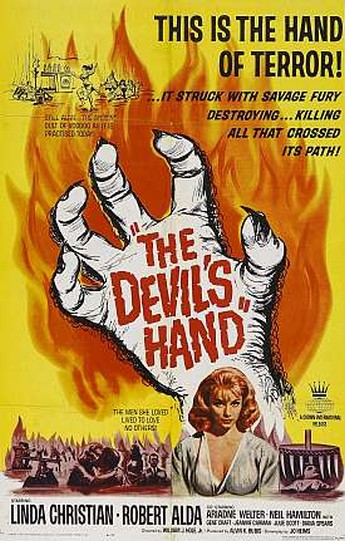 It’s films like this that make me look yearningly at the shelf, where the Hammer box-set sits temptingly, next in line to be watched. Because I’m pretty sure that, at about the same time Crown International were putting out dreck like this, any of the eight movies in the Hammer set could probably kick its arse without climbing from its coffin. Rick Turner (Alda) is plagued by dreams of a mysterious woman, until one day, he sees her exact likeness as a doll, in the window of a shop. Inside, he’s greeted warmly by owner Frank Lamont (Hamilton, who’d go on to become Commissioner Gordon in the Batman TV series), who recognized him from when he brought in the picture on which the doll was modelled. Except, Rick has never been in the shop before. Weirder yet, another doll looks just like his fiancee, Donna (Welter), who not long after, goes down with a heart condition. Turns out, to cut to the quick Lamont and the mysterious woman, Bianca Milan (Christian), run a satanic cult devoted to “the great devil god Gamba” – the temple is in the remarably capacious basement of the doll shop – and have their eyes set on Rick as their latest recruit. Can he withstand the brainwashing and escape with his soul intact?

It’s not as interesting as it sounds, with even the cult being a hodge-podge of influences: African drummer, Tibetan servant, contraption hanging over the altar to “test” adherents’ loyalty that resembles a prop from Wheel of Fortune. Christian may be the best thing about the film, coming on like a slutty version of Anne Francis, even if her evil talents appear to amount to little more than a spot of astral projection. Otherwise, it’s a completely non-threatening religion, whose idea of evil appears to consist of not much more than stock market manipulation, and the dispatch of sleazy tabloid journalists. Hardly seems even moderately dubious behaviour, by the lax standards of the early 21st century, really, and it certainly doesn’t make for enthralling viewing, with the dark, satanic rituals looking more like a bit of dinner theatre at the local Rotary club. Even at a terse 71 minutes, this outstays its welcome, with few aspects which will stay in the mind beyond the laughable finale and closing credits.