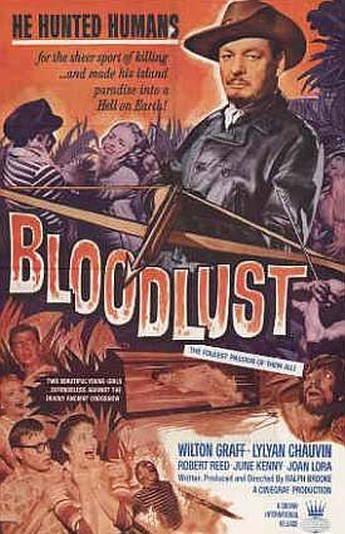 This not-exactly enthralling version of The Most Dangerous Game sees two couples on a cruise. They opt to land on and explore an apparently deserted island, only to find themselves the “guests” of Dr. Balleau (Graff), a former Army sniper who now indulges his fondness for hunting by tracking down those who arrive on his island. And, boy, you should see his trophy-room. But he’s not totally savage; he’s only going to use the guys for sport, the women being kept for… Well, it’s vaguely hinted (this being 1961), that a different kind of “sport” will be part of their future, the good Doctor’s wife now being stuffed and mounted. And not in the conjugal sense, either.

Given the amount of time the doctor spends with the four new victims, flagrantly disobeying Evil Overlord rule #173 (“I will never allow my enemies to stand directly behind me”), it’s stunning they never bother to simply rush him. At least one (Reed, who’d later go on to fame as the dad in The Brady Bunch) is an only slightly gone-to-seed jock, despite a somewhat odd and distracting posture, while one of the girls announces right in the opening scene that she’s the daughter of a judo master. Perhaps they were stunned into submission by Graff’s resemblance to a cut-rate Vincent Price, or possibly Robert Englund.

There’s way too much slow meandering around the jungle here to be interesting, even at a brief running-time, which is likely the movie’s best feature. While it may suck, at least it doesn’t suck at length, so by the time you come to the conclusion that it isn’t going to get any better, you’re past the half-way mark. The film needs to be a good deal more energetic to succeed: instead, it’s only occasionally that it appears to possess a pulse, such as the trophy-room, or one amusing sequence involving an acid-bath and the aforementioned judo heiress.

These are mere blips on the flat-line which is the prognosis for the movie, with neither the performances nor the direction climbing much above tolerably workmanlike. It’s not giving away much to say it ends more or less exactly how you think it might, though even there, our protagonists are so useless, one is left questioning whether they deserve to survive. Still, I have a lot more tolerance for crap, when it doesn’t outstay its welcome, and clocking in at 68 minutes will hardly tax the patience. At least, not for very long.