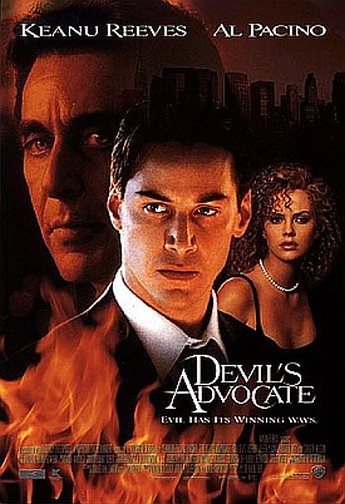 Hot-shot Florida lawyer Kevin Lomax (Reeves) is invited to the New York to work for the firm owned by John Milton (Pacino). Could he be…Satan? Well, the title and the name of Pacino’s character pretty much give you the answer there: the main surprise is that it takes a razor-sharp legal mind like Lomax so long to work out his employer is the devil. Mind you, he is entirely self-absorbed, ignoring the increasingly-fragile mental state of his wife (Theron), who disintegrates under the pressures of big-city life, the cocktail circuit and neighbours who shape-shift into demonic entities. His eye wanders over to the corporate babe (Nielsen) and he gets engrossed in doing what got him where he is today: defending the indefensible. As a result, every step he takes brings him closer to losing his soul, and probably not just in the metaphorical sense.

Lawyers as the spawn of Satan. Never heard that one before. If the metaphors here are never anywhere near subtle parables for scripture [Milton’s first offer to Lomax is an obvious Manhattan-based version of the devil taking Christ up and offering him the kingdoms of the world], that doesn’t make it any less fun to watch Pacino, in particular, playing the Lord of Darkness. Reeves is all slick and greasy as you’d expect, but it’s likely Theron who makes the best impression: while hindsight is 20/20, her future path to Oscar glory seems self-evident built on this implosive performance. The ending, sadly, sucks, being a primary school cop-out of the highest order that does a good job of leaving me feeling that I’d wasted 2 1/2 hours of my life. Still, it’s not as if I had anything better to do.