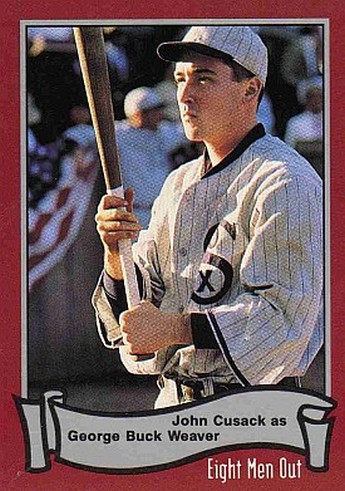 Perhaps the grubbiest saga in baseball history centers on 1919 World Series, where the Chicago White Sox agreed to lose to the Cincinnati Reds – partly for money, but also, the film suggests, to getting back at their owner Charles Comiskey, depicted here as a notorious skinflint. This approach does tie in with Sayles’ undeniably socialist tendencies, though less clearly than other films, such as Matewan. Here, the impression given is that the darkest chapter in the sport, was an unfortunate combination of circumstance: players good enough to get the World Series, but disgruntled enough to accept a bribe, and in an era where they basically could only play for one team [and where $10,000 was enough to buy a player, being more than their entire season’s salary]. The split of the White Sox into factions – one well-educated and better paid than the other – also contributed towards to the amenability of some players to corruption.

As a film, it’s probably best when concentrating on the motives and the action off the park. It’s very much an ensemble piece with no particular star, the focus flowing from instigator Arnold Gandil (Rooker) through naive country boy ‘Shoeless’ Joe Jackson (Sweeney) and onto aware but incorruptible third-baseman George Weaver (Cusack) and pitcher Eddie Cicotte (Strathairn). Similarly, off the field, scenes cover the journalists, gamblers and even the kids of the era – leading to the poignant (if factually doubtful) scene where a young fan begs Jackson to, “Say it ain’t so, Joe.” I was less enthused by the ball-games themselves. There’s no real tension when we know the end result, and it’s a significant amount of the running time. Instead of grubby reality, it’s the mythic quality of baseball I want to see. In the end, the film founders on the inevitable problem with all movies based on actual events. Real life is rarely cinematically structured, and something has to give. Here, it’s the drama; while I can’t fault the authenticity, I’d have happily settled for less of that.