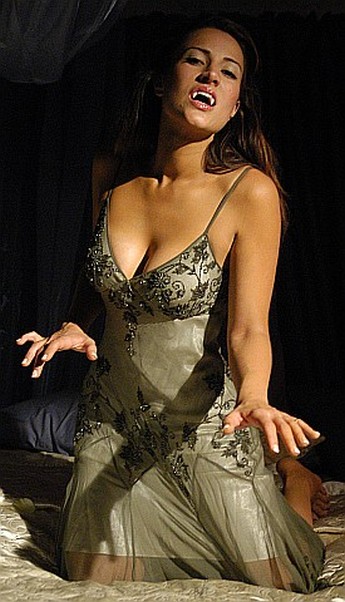 At one point, I turned to Chris and said, “D’you think Tony Todd was…” “Drunk the whole time?” was her immediate response. Well, I was going for “…on set for just one day,” based on the fact that all his scenes happen in the same place, but the more I think about, the more plausible her scenario becomes. Certainly, if I were the once-great Todd, now reduced to this kind of straight-to-DVD crap, I’d opt for heavy intoxication: and that his performance is still the best here, says much about everyone else. At least he’s in the film longer than C. Thomas Howell, whose cameo must rank as among the most pointless of all-time. Will, a pacifist vegetarian, finds himself clashing with a jock at college over the lovely Jayne (Lange), a feud that, for reasons too boring to go into here, brings him into conflict with a local vampire coven, led by Todd, though his underlings (Connery and America Olivo) are feuding over who should be heir to the throne. Meanwhile, a bunch of vampire-hunting priests – at least, I’m assuming so, going by the sacks they’re wearing – are also lurking in the area, wielding pointy weapons with some intent.

“I’m confused,” said Chris at another point. “I’m not,” replied your humble writer, “Because to be confused, you actually have to care what’s going on.” That is not a problem here, in the slightest. The script is full of the kind of self-indulgent one-liners you’d expect from a rookie writer, and it simply has too many plot threads crammed in, apparently the belief being, that way, one of them might be of interest somehow. The reality is, they all suffer, and there is nothing else of interest. “Wars” in the title implies a good deal more action than we get here. We get a couple of minor skirmishes, so the usage of the word clearly means something different on the video-store shelf than in the real world. The gore is perfunctory at best, and if you want to see more of Olivo than the pic at right, don’t get your hopes up: there’s not even any of that old vampire B-movie staple, gratuitous nudity. Thoroughly unimpressive.