Back in 1986, Vandewoestijne made a sick little Belgian film under the pseudonym “James Desert”, Lucker the Necrophagous. This is more or less what it sounds like and it acquired a certain notoriety. Later in the decade, it was described by Eyeball magazine as “a wonderfully sordid piece of filth unlikely to be granted any sort of release in this country.” And they weren’t wrong. It’s still, to this day, not officially available in the UK. Took Vandewoestijne almost 30 years to start making further movies, though on the evidence of this, it wasn’t exactly worth the wait – or perhaps this just needs more necrophilia.

It opens with a set of captions talking about abuse in the Catholic church, though I’m not sure if this is supposed to take place in Belgium or America. It’s set in 1978 at “St Andrews Catholic School”, and the utterly unconvincing high schoolers, who make Olivia Newton-John look young, all speak English with heavy European accents. As do the staff and, in fact, everyone else in the movie. The kids are there for detention, Breakfast Club-style, though the pair of priests in charge are quickly shown as sadistic and intolerant bastards. The tables are turned after the sudden arrival of a group of young, heavily-armed former and present pupils, who plan to take revenge on the clergy for the abuses suffered at their hands. As the truth comes out, not all the hostages are exactly unsympathetic to this cause. 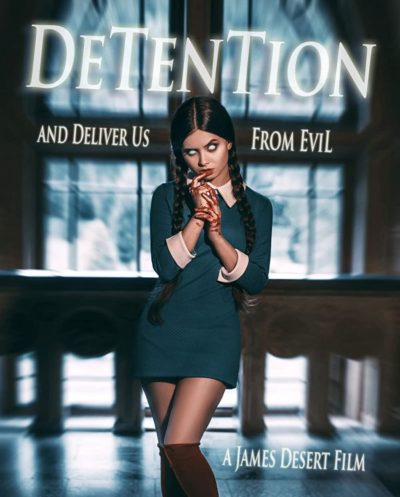 This clearly wants to take a serious subject and treat it as fodder for exploitation. I’m perfectly fine with this: it’s that it fails even as exploitation which irritates me. Really, the topic is such that it could – you can argue, should – have pushed the pedal to the metal in terms of the fates meted out to the paedopriests. No torment would have seemed unwarranted, and the audience would have remained onside regardless. There’s only one moment which reaches the necessary level, and to get there, you’ve to sit through a pile of utter Eurotripe which fails to move the needle. There’s one moment where they mention in passing a paedophile network, and I thought this was going to tie into the super-murky case of Marc Dutroux. Nah.

The only person who makes any impression is Marshall, playing “Psycho”, the aunt of one of the pupils, who appears to be making a valiant effort to channel the spirit of the late, great Wendy O. Williams from The Plasmatics. She comes close to making up for in sheer attitude, what she lacks in English language ability. Otherwise, you’ll get some light canoodling between a pair of lesbians and… uh, that’s about it, despite what the poster seems to promise. It merits slight approval for the manner in which some hostages end up siding with their captors – and not in a Stockholm syndrome way. Though being held captive at gunpoint is likely the only way I will ever watch this again.