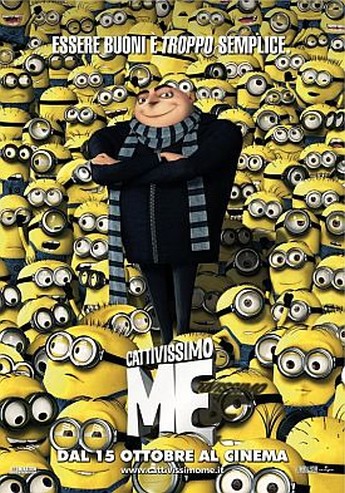 I can’t help feeling that the comedic potential of a film focusing on the villain as its main character, is well short of being effectively realized. I was hoping for the ‘Evil Overlord’ movie, but I guess we’ll just have to write that one ourselves. Instead, we have Felonious Gru (Carell), the world’s former top villain; he just got one-upped by rival Vector (Segel), who stole of the Pyramids. Gru plots to regain the crown by stealing the moon: to do so, he needs a shrink-ray kept by Vector inside his impenetrable fortress. The only people allowed inside are a trio of local orphans selling cookies, so Gru decides to adopt said children, and use them to get inside Vector’s lair, in order to move his plan forward. Of course, there is hardly anyone less well equipped for the task of parenting: dance recitals, bedtime stories and amusement parks are not exactly regular items on Gru’s to-do list.

The problem is, the film plays the results absolutely safe. Gru may be a “villain,” but there’s no sense of edge or threat; to borrow a line from Python, he’s not “despicable,” he’s a very naught boy, ad his unsupportive mother (Andrews) would like agree. And once you see the orphans, it’s easy to see precisely where the movie is heading – and it doesn’t disappoint those expectations in the slightest. I suppose wanting more is unfair, but we’ve been spoiler by smarter work from the likes of Pixar, to expect something with a bit more wit or sophistication. It starts off well enough, looking like it will be a spoof of Bond-ian exploits, with nods to the adults: for instance, the institution which funds the villains has a sign: “Bank of Evil – Formerly Lehman Brothers”. However, the makers abandon these angles in preference of too many spoonfuls of sentimental sugarm and the entertainment on view for anyone over the age of puberty, declines in proportion to this force-feeding.