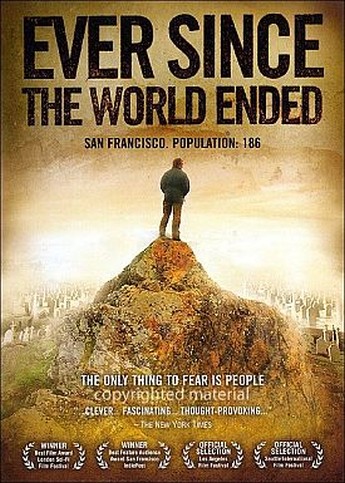 We first saw this back in April 2001, and a lot has happened to the world since. 9/11; swine flu; H1N1: the end of the world, one way or another, seems distinctly more plausible than it did at the time. We liked it then, and we liked it almost as much now; the other major alteration in this “post-apocalyptic documentary,” is the presence of the then-unknown Mythbusters Adam, playing a techie type. One does get the sense most of those present are playing themselves, close enough, except perhaps near-psychotic arsonist Mike. What particularly impressed me this time round was the editing, which manages to take what is not much more than a series of talking heads, and combine them into an effective piece of story-telling, that puts over the necessary information about the situation and the various characters.

It is fair comment that the survivors are hardly a full spectrum of society – apparently, liberal Caucausians will be the dominant force after the apocalypse, along with cockroaches – and the cityscape is nowhere near as wrecked as it should be. If the population of San Francisco is now 186, that’s about 800,000 corpses left unaccounted for. However, both are an inevitable result of the limited resources, and the story being told is still more than effective enough to pull you in. Particularly thought-provoking was the younger generation, who have grown up in the new world; their adaptability and lack of interest in how things “used” to be, has the strong air of plausibility. It’s something that would make for a great ongoing series, the stories of all the characters and their interactions developing, and reacting to the problems everyday life now causes, internal or external. While it’s not often that a film ends, and leaves us immediately wanting to see more, this one certainly did.

[Original review] Licking the similarly pseudo-documentary Blair Witch into a cocked hat in virtually every department, EStWE portrays a world which, if perhaps not quite ended, is certainly limping badly. A plague ten years previously has reduced the population of San Francisco to less than two hundred, and the survivors are split between those trying to recreate the past, and those who want to move on. The dialogue is largely improvised; the directors knew what they wanted to say, but left saying it to the cast. This works well, since they are largely non-actors, and thus come across as natural and genuine – the recounting of facts doesn’t require much formal acting.

As a result, the film is mostly a hugely convincing portrait of their largely-collapsed civilization, without much recognisable plot. Yet what it has, definitely works well, however, both the thread about a threat to the community from within, and their disastrous attempt to explore the surrounding countryside. This is not overplayed and, as a result, has more effective menace in five minutes than Blair managed from start to finish. After this was over, it was an enormous relief to walk out onto Sunset Boulevard and discover there were still people around. A