When is a horror film not a horror film? When it’s an unsubtle metaphor for the Holocaust and Poland’s relationship to it. English expat Piotr (Tiran) returns to his native land to marry his fiancee, Zaneta (Zulewska), in her family’s village. While doing a spot of pre-nuptial yardwork, he comes across human remains buried under a tree; to avoid derailing the celebration, he keeps his discovery to himself. As the wedding proceeds, however, he starts to see things, and when he eventually reveals his find, the skull can no longer be found. Things get worse for Piotr, first going into what seems to be an epileptic fit, then starting to speak in the unknown tongue of Yiddish, claiming to be a Jewish girl called ‘Hana’. Village elders recall her mysterious disappearance – but why should possession interfere with the festivities? Carry on regardless! 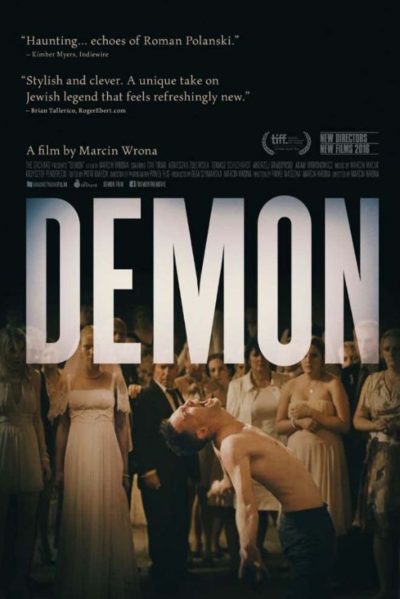 Initially, this does have a nice sense of ominous foreboding. As he arrives, the first person Piotr sees is a hysterical woman thrashing about in the water. The problem is, Wrona seems less interested in the horror aspects for themselves, then how he can use them to cudgel his audience across the head with generational guilt – something of which I’ve never been a big fan. It seems to be the main theme here, with the older folk here relentless in their desire, for various reasons, to dispose of “the problem” quietly, such as by locking the possessed groom in the cellar. There is a certain element of black comedy to be found in this, or the local Catholic priest’s desire to nope the fuck out of there, eventually hitching a ride in an ambulance.

But this is clearly intended as a metaphor for Polish involvement in the Holocaust. It’s a national dirty little secret that not every Pole was opposed to it, and the country still has a tendency to xenophobia, as Piotr himself experiences. This is not a topic which was of any interest at all to me going in and Wrona does nothing to make it so. While the synopsis is not technically wrong – “After receiving a country house as a wedding gift, a man comes undone at his wedding reception as an ancient figure from Jewish folklore takes over” – it’s safe to call it not entirely accurate. If it had told the whole story, I’d likely have found another Polish film for this feature. Perhaps one where the director actually wanted to make a horror movie.

Maybe if you’re fond of Polish rural life, this could have some appeal. Personally, there was not enough to sustain interest, and the third act is terrible, the wedding guests simply wandering off, as if bored of the whole affair. I can’t blame them, as it’s a classic case of putting the message before the movie. The creepiest thing this actually has to offer, is likely that the director committed suicide while promoting the movie at the Gdynia Film Festival. Hanging yourself in your hotel room is what I call wholeheartedly committing to the promotion of your horror movie.