I’m steadily coming to the conclusion that I am just not on the same wavelength as Villeneuve. I did not like Arrival at all, fell asleep in Blade Runner 2049, and now there’s this, which left me almost entirely unmoved. I have read the book, but it was probably 35 years ago, so am not particularly qualified to comment on how faithful an adaptation it is. Most of the relevant bits look to be included, even if it takes 145 minutes to get to what feels more like an intermission than any kind of ending. Kinda hard to judge on that basis – imagine trying review the book if someone had ripped out the last 400 pages. But in line with what I felt about his sequel to Blade Runner, this just feels incredibly dour. 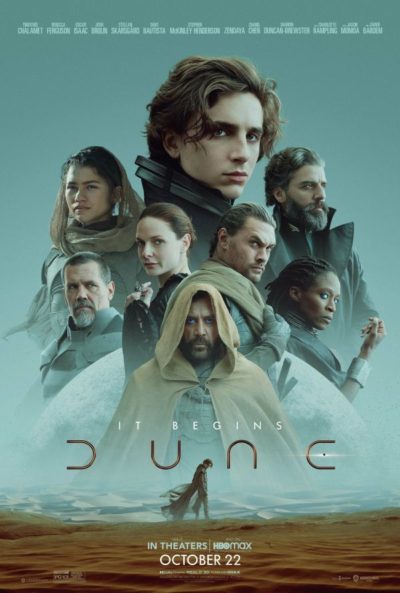 By that, I mean virtually every character in this seems fed-up with their lives. The film is heavily populated by the “high born”, basically the future version of the 1%. But hardly anyone takes any pleasure from their privileged position, and the film is full of pessimistic pronouncements like, “You don’t really understand the grave nature of what’s happening to us.” Save for Duncan Idaho (Momoa), everything is a chore, as House Atreides takes over the planet of Arrakis from the cruel Baron Harkonnen (Skarsgård). He’s not happy about it, and arranges for misfortune to befall first lady Jessica Atreides (Ferguson) and her son, Paul (Chalamet). They escape into the desert to hide with the local Fremen. They, conveniently, regard Paul as a messiah, thanks to the groundwork laid by Lady Jessica’s group, the Bene Gesserit.

I liked the overall look of the film, with the spaceships in particular giant hulking monstrosities that reminded me of Douglas Adams’s quote: “The ships hung in the sky in much the same way that bricks don’t.” But when the characters appear to be going through the motions, with all the enthusiasm of career chartered accountants looking forward to retirement, why should the viewer give a damn? It doesn’t help that Chalamet is a bland, soy-flavoured hero, not the charismatic individual you would expect “The One” to be. Frankly, every time he was described as the messiah, I found myself thinking. “He’s not the Messiah. He’s a very naughty boy!’ If only Dune had reached that level of passion.

Frankly, I had more time for some of the supporting cast. While Momoa may not have been stretched by his character, he brings an energy to the role. I’d also like to have seen more of imperial ecologist Dr. Liet-Kynes (Sharon Duncan-Brewster), since she was one of the few people in the film who actually give the impression they care about anything much. This feels less a thrilling adaptation of a classic SF novel, than a checklist of points to be depicted. Look! A Gom Jabbar! Sandworms! When a movie-maker has to resort to their central character watching a holographic encyclopedia, maybe we should conclude the novel genuinely is unfilmable.