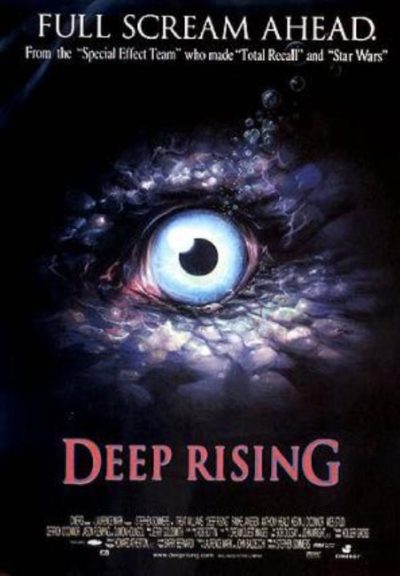 Starting off as ‘Under Siege’, with a group of crims preparing to assault a liner, this suddenly warps when they find a distinct lack of passengers, and something very icky now inhabiting the stricken ship. From here, you’re in ‘Aliens’ territory, with the odd nod to the likes of ‘Tremors’ and ‘Anaconda’, though the relatively brief period since the last-named has seen computer effects go from obviously artificial to solidly convincing.

There’s an inevitability about who gets shredded, yet Treat Williams and Famke Janssen put enough effort in to balance the cardboard villains. It’s crunchy and juicy on the gore front and, probably wisely, no effort at all is made to explain the Rob Bottin designed creatures. The result is an old-fashioned monster mash, albeit one bordering on ‘Legend of the Overfiend’ for sheer tenticularity, and of rather more than B-movie quality, at least on the technical side