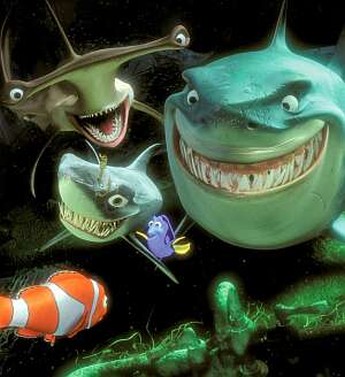 A swift aside. This is preceded by the early Pixar short Knick Knack in which a snow-globed snowman seeks to break out and join other tourist souvenirs. One of these is what the Pixar website described as a “disproportionate blonde from Miami”…except that, as released with Nemo, she has suffered severe cosmetic reduction. Scope out the original before you go see the theatrical version.

The most impressive contrast to this movie was the trailer for Disney’s next ‘traditional’ animated feature, the deeply sucky-looking Brother Bear. Nemo has everything this appears to lack: wit, genuine charm, and imagination by the bucket. The story of Marlin the fish’s search for his lost son will put you off sushi for life. Technically, it’s amazing; if I didn’t know otherwise, I’d swear the backgrounds were real underwater footage, though Pixar seem to have deliberately made a lot of the characters look like traditional cel animation. Albert Brooks’ Marlin is a little too stuffy, but there’s ample compensation in Dory (DeGeneres), a fish of very little memory, and the other characters that populate the ocean, with even the names obviously having been given thought. There is some moralising about disability; however, it’s so subtle Chris had to point it out to me afterwards.

Like the best animation, this appeals to all ages, making its G-rating a badge of honour, even if you should find the latest showing possible to avoid bawling brats. The story is simple, yet there’s enough wit, such as the ‘Fisheaters Anonymous’ support group, to keep adults thoroughly entertained. Turtles that sound like surfers, French crustaceans, and mono-syllabic seagulls – just as Spirited Away locked up the Oscar early in 2002, so this is surely a cert to be swimming towards the stage come next February. I’m prepared to bet that it won’t be Brother Bear. I also suspect a run on clown fish in pet shops to be imminent.