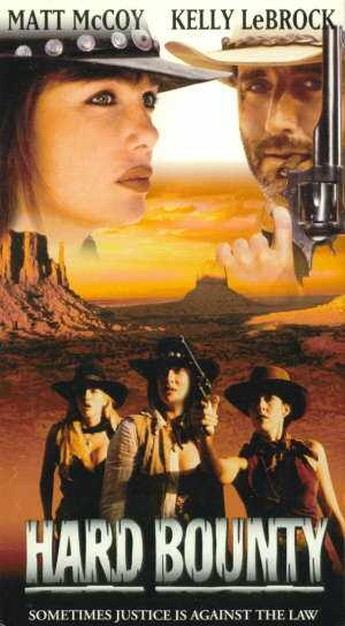 “With the Vatican preparing to be one of the main world centers for celebrating the “millennium” Italian public broadcast TV station RAI 1 has switched its focus to sanctity and family fare. Unfortunately a misclassification in its film library resulted in raunchy western Hard Bounty…being screened as families across Italy settled down to their breakfast coffee. RAI 1’s morning viewing figures spiralled upwards until management pulled the plug halfway through the film.”

The above is perhaps more amusing than the movie itself, though the film does suggest silicone implants were around much earlier than 1962. The main plot has a trio of two-dollar saloon girls, led by madam LeBrock – sporting a British accent for no particularly apparent reason – hunting down the varmint (Wynorski vet Terlesky, in good form here) who brutally killed one of their number – again, for no particularly apparent reason.

However, this takes a good hour to get going: until then, it’s mostly McCoy’s movie; he is Kanning, a former Texas Ranger who takes over the saloon as part of a debt, after growing disenchanted with his life as a bounty-hunter. During this stage, the film potters about, mixing shootouts with gratuitous nudity to moderately entertaining effect. Outside of Terlesky, no-one makes much impact in the acting stakes, even if the movie does look better than its sub-million dollar budget. It perks up towards the end, with the women and Kanning stalking their prey and his henchmen round a ghost town, but otherwise, it’s probably not especially memorable, unless you’re a fan of spag-titty Westerns.