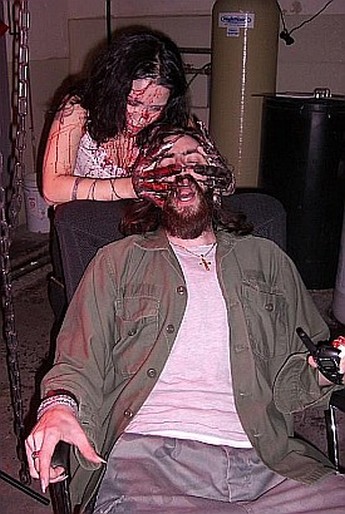 Though still effectively executed, this straightforward slasher is nowhere near as ambitious, cinematically, as Tretta’s last film, The Great American Snuff Film, opting instead for a more standard approach to the horror genre. Six sickos are invited to a disused factory to witness the killing of an innocent, only to discover they were lured there by Denny (Todd), a Jesus-freak [with the emphasis firmly on “freak”] who needs a steady supply of victimes to feed his sister Alexa (Mousel). She was turned into a flesh-eating ghoul as the result of a chemical experoment turned wrong, and Denny has now decided to combine his religious views with her nutritional needs. But included in the party is the innocent Ana (Vargas), who is trying to find the individual who was responsible for killing her daughter, and has burrowed her way into the sicker side of the fetish underground, to get an invite to this event, where she believes the killer will also be present.

The results are solid enough, with some excellent effects work, and the performances are not bad at all: Vargas comes across well, projecting a good degree of empathy, Todd is an excellent, off-the-wall loony and Mousel has an otherworldly quality that’s almost freaky – I’d have had her pegged as a demon, more than anything human. The problem is mainly a script that sets up the characters and then doesn’t give them anything to do, except run about and get killed. Which is admittedly kinda cool for a while, but the longer it goes on, the less interesting it gets: they might have done better to hold back the revelation about Alexa’s origins, and used that to drive the plot forward in the second-half. There is a tweak that does twist things around at the end, and all told, it’s by no means bad; I just had to suppress a twinge of disappointment that it was something largely generic.