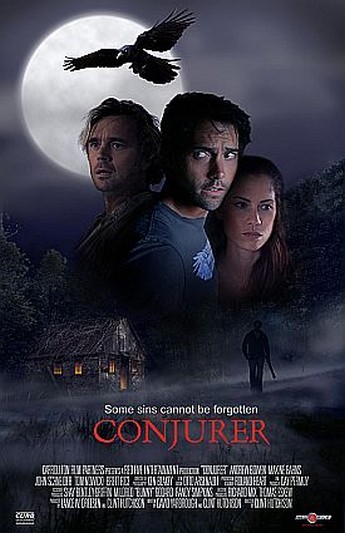 If you’re looking for something to put you off moving to the country, this is probably a good start. Shawn Burnett and his wife, Helen, head for a rural idyll, after she suffers a miscarriage. They’re going to build their dream home there, even though the derelict cabin on the corner of their property is ominous. with a capital Om. There’s a neighbourhood kid hanging about the place; is he responsible for the signs of life Shawn finds there? Or is the reality buried in the past of their property – which might turn out to be the house of their nightmares. While there isn’t a great deal new here, it is an effective throwback to a kinder, gentler era of horror films, where atmosphere was valued above explicit gore. I don’t hold particularly towards one kind as superior over the other; it’s really down to the execution, and neither kind requires more skill, just different kinds of skill.

Anyway. While constructed in a way only possible in horror movies, where even the windvane looming in the background has come from central windvane casting, it’s still put together with some skill. There is a particularly nice sense of build-up, with the initial sense of idyll gradually replaced by unease, which then turns into menace and dread, where even the most prosaic, everyday events can carry a sense of impending doom. Probably the main strength is a very good performance from Bowen, who is a sympathetic protagonist – for the bulk of the movie at least – dealing with events that are beyond his comprehension, and snowballing downhill to an uncertain end. Hutchison appreciates that it’s essential to give the horror a human face, especially because of its understated nature, and this help the end result to become an effective piece of work.