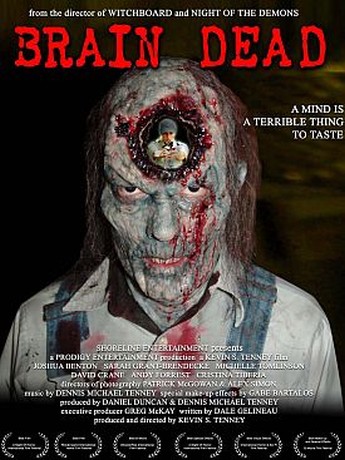 There is an elegant simplicity here, that works in favor of the film. A bunch of disparate individuals – ranging from a pair of criminals (albeit with radically-different outlooks) to a televangelist and his intern – are holed-up in the same cabin, only to find themselves under siege from an alien parasite that takes over its victims and turns them into ghouls, hungry for flesh. I will now proceed to pad this synopsis blatantly, since there isn’t much more to the film than this – though, being honest, what do you need? It isn’t the story that’s important here, it’s the execution, and this has pretty much everything you might want from a good B-movie. Copious gore; smart-ass dialog, and just about all the female characters take their tops off, for reasons some killjoys might complain are not strictly necessary to the plot.

Benton makes a particularly-good impression as the non-psychotic of the two criminals, whose mouth is clearly responsible for getting him into trouble, and the script makes particularly fine use of sarcasm. If most of the other characters are swifly-drawn, they are given personality quirks that help them rise above two dimensions, even if the most memorable thing about them is usually their deaths. [C’mon – that hardly counts as a spoiler, does it!] The special effects are by Gabe Bartalos, who has been doing this kind of thing for the best part of 20 years, since Frank Hennenlotter’s Brain Damage, and are slick and squishy, to say the least. We even get a cameo from B-movie icon Jim Wynorski, as the local sheriff. Tenney also directed Night of the Demons, which you may remember for Linnea Quigley’s novel use of a lipstick. This is a nostalgic, entertaining throwback to that era of horror – the word “fun” is probably the best way to sum it up.