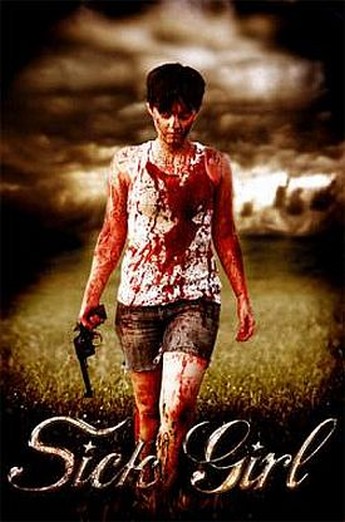 Let’s cut to the chase. The creator-provided synopsis goes, “A girl who wants to protect her little brother, fuck her older brother and torture everyone else out in the barn.” Any questions? Well, while undeniably accurate, the film isn’t quite as simplistic as this would suggest. Izzy (Andrews) is left to bring up her young brother (Trepany) after her older sibling heads off to Iraq with the Marines – both parents are absent, and the reasons for this are, interestingly, never made entirely clear, though we have some evidence for Izzy’s involvement. The only one who helps out is Barney (McGarr) a biker who plays Santa Claus at the local hospital, but it’s soon made clear that Izzy is entirely capable of fending for herself. Especially when a proto-thug at the local school decides to pick on her kid bro.

Izzy is an intriguing mix, a character somewhere between Juno and Dexter; to those she loves, she is fiercely loyal, yet anyone else had best not cross her, or the results will be horrific, in ways beyond your imagination [certainly, at least one sequence goes well beyond our imagination!] I think it’s her sheer cold-blooded approach that is the most chilling thing here, and Andrews is simply phenomenal in the role, possessing a calmness which is completely unnerving. Even when engaging in brutality of the most appalling sort, you suspect her heart-beat rarely goes above 85. She even takes time out to lecture small children on the evils of bullying, where her philosophy is, “There’s nothing wrong with hurting things smaller than you – providing you also take on things bigger than you. Then size is irrelevant.” Cold: very cold. If you want to peer into the abyss which is the very darkest corner of the human psyche, then this is low-budget cinema at its brilliant best. However, you should be aware that you might see things you will not easily forget.