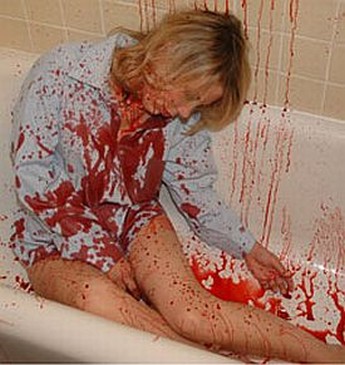 If you are planning on summoning a demon, and need a sacrifice, why not call up an escort agency and have them send a girl over? What could possibly go wrong? Well, except for the demon possessing the intended victim instead, in order to continue its quest for the descendant of Mary Magdalene (Di Prinzio) – who is also working as a hooker, which I guess counts as following in her mother’s footsteps. Oh, and its capable of moving between people with a kiss. This makes the police’s job pretty damn hard, for obvious reasons, not least because one of their homicide detectives is among the hosts who are infected. So they turn to a therapist and former prostitute (Mullins) for help in unravelling the case. But who realized prostitutes were uniformly attractive, clean and sat around naked so much? Welcome to the wonderful world of exploitation cinema, with hookers called Donna and Vixen – which makes me wonder where Cupid, Comet and Rudolf are.

Yes, this is a low-rent crossbreed between The Hidden and The Fallen, except with a great deal more of that old B-movie standby, naked flesh. As Fred Olen Ray once said, nudity is the cheapest special effect because you don’t have to wait for it to be ready, there are no wires to hide and no one ever complains about it. Devine is certainly from that school, and hardly a scene goes past without breasts – or sometimes, a good deal more – being exposed. This may be a somewhat-wise move to distract you from the performances, some of which, to be honest, leave a good bit to be desired. Macek, as the detective and sometimes demonic host, is the best of the bunch, but most of the others come across more like hookers playing actresses, rather than actresses playing hookers. The effects are fairly limited, yet occasionally very effective, with the death by broom handle coming to mind there, and the script throws the odd curve-ball. For might this be a Christian exploitation flick? If the poverty-row origins are barely concealed and the results are often derisory, I still found it an entertaining-enough piece of schlock, with few pretensions beyond that.