One unexpected side-effect of The Walking Dead, is that I now have a great deal less tolerance for what an old acquaintance used to refer to as “shot-on-video shitheaps” in the zombie genre. There was a time when horror fans pretty much had to rely on these to get our fix of re-animated, flesh-eating corpses, because they sure as hell weren’t being made by anyone with a budget. The market opportunity presented was filled by any guy who could talk a few of his mates into shambling around the local streets. The results were generally about as good as you’d imagine, given the budget typically extended to a bag of butcher’s offal, if you were lucky. 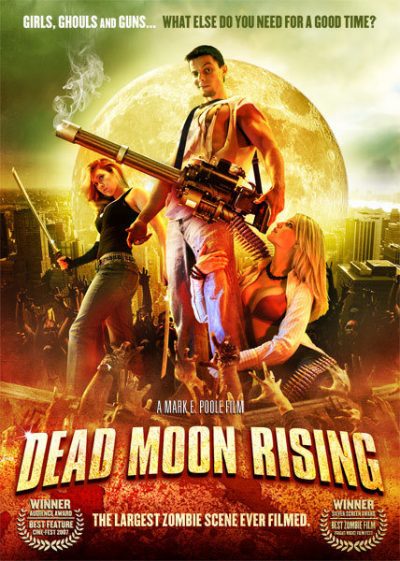 That is no longer the case. We are hardly starved for zombie action, and can afford to be rather more discriminating, making it easy to slag off woefully cheap productions such as this. There is precisely one point of interest here, what was at the time recognized by The Guinness Book of Records as the largest zombie scene ever filmed, with 1,200 volunteer participants. I must admit, it’s a marketing stroke of genius, because it guarantees that your film will eventually sell 1,200 copies. This is significantly more sales than this would otherwise have deserved.

For the rest is your generic, paint by numbers “zomedy,” which wants to be Shaun of the Dead – yet weirdly, writer/director Poole appears more interested in channeling Scrubs. Jim (Crowe) is J.D, right down to his breaking of the fourth wall to explain things to the audience, and for a bit, I thought that Seely, who plays car-rental agency colleague Nick, was Neil Flynn who portrayed the janitor on the show. Even when disavowed of that notion, the acrimonious bickering between the two was very strongly reminiscent of the Scrubs relationship. There are certainly worse things to mimic, and neither actor is bad – the performances are likely the best thing about this, overall – yet it’s an odd choice to shoehorn into a zombie flick.

When the apocalypse strikes, the pair have to make their way through the streets of Louisville, with the aim of getting to an army surplus store they figure will be the safest sanctuary. Along the way, the party gain and lose various stock character stereotypes, of whom the only two of note are April (Goldsmith) and Vix (Williams), the latter in particular being a bad-ass zombie killer whose character would likely have made a better lead than Jim. The special effects are as bargain basement as the rest of the production (the audio, as ever, proves the bane of microbudget cinema), and even a lengthy, entirely gratuitous lesbian snogging session between April and Vix proved insufficient to rescue my interest. It eventually builds to that record-setting scene, which comes virtually out of nowhere, and makes as little sense as the rest of the story-line – while the sheer numbers are impressive, there’s no consistency in their look, and half of them seem intent on mugging for the camera. I can only conclude there’s not much else to do in Louisville.