I’m not sure I’ve ever seen a horror movie from South Africa before. I guess the closest was probably Richard Stanley’s Dust Devil, shot in nearby Namibia, just after it had gained independence. However, I’m not sure I still haven’t seen a horror movie from South Africa, since this has its (beef) tongue so far in cheek, it may not qualify. A mad scientist liberates an experiment in creating a super soldier from a secret government base, only to discover it is missing something kinda important: a head. So what if the only replacement available is of the bovine variety? Inevitably, the creatures escapes and goes on the rampage with a chainsaw through a nearby game preserve. It’s up to incompetent copper Detective Chopper (Viljoen) and pole dancer Charlize (van Graan), first to stop the creature, and then the epidemic of half-human, half-cow infected left in its wake. 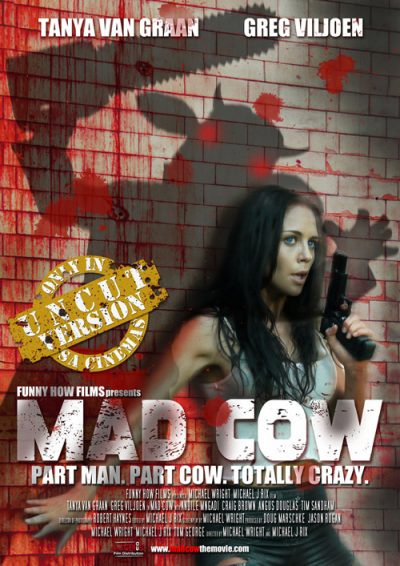 Definitely comedy-horror rather than horror-comedy, it’s sure to test your tolerance for crap jokes to the limit. Example #1: Chopper saying, “My friends call me Jimmy – which is strange, because my name’s Vince.” Example #2: Charlize’s routine consists of her gyrating around a guy wearing an “I ♥ Warsaw” T-shirt. Because “pole dancing.” Geddit? Example #3: the two undercover cops working for Chopper, are disguised as a Zulu who plays a musical saw, and a shrub. I was waiting for the obvious joke there about “planted evidence”; if it happened, I must have missed it. That should all give you an indication of the comedic level to expect here. Think Monty Python crossed with the early works of another Commonwealth citizen, Peter Jackson – though not quite as good as either, to be sure. There’s also an unexpected number of references to local cuisine. Not sure what that’s about.

This all said, I confess to being adequately entertained, and did actually laugh out loud on several occasions (four, if you need a precise count – the delicate rampage of the creature around a china shop was likely the loudest). It’s dumb, certainly, yet has enough self-awareness of its own idiocy, to defuse or deflect the most obvious criticisms. Not least, that the monster looks like it came from the clearance aisle at a disreputable Halloween store, and the performances are straight from an end of the pier pantomime, though you’d be hard-pushed to argue they are inappropriate for the material. The film wears the low-budget proudly, and almost dares a viewer to say otherwise, with a “Come at me, bro!” attitude toward its own ineptness. Few things are as personal as humour, and particularly this kind is very much a question of taste. You’ll need a significant tolerance for the absurd to get much out of this, though the sheer quantity of gags present do mean that at least a few should hit the spot. Whether it’s enough to justify the 85-minute running time for you, I’m likely not qualified to say.