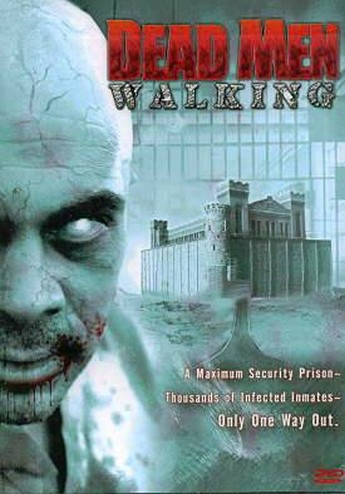 While most films that arrive here have to go through a waiting period before getting seen, occasionally one has a concept so appealing, it requires immediate attention. “A horrific plague infects a maximum-security prison, turning visitors, guards and prisoners into vicious flesh-eating beasts who slaughter all in their path. A heavily armed unit of elite guards band together with the surviving inmates to battle the ravenous horde.” No surprise this one took, oh, about ten minutes to enter the DVD player. On the whole, it lived up to these heightened expectations well, though the sole inmate banding is actually done by a visiting CDC investigator (Bruner), and she “bands” with just one (Firestone). But vicious, flesh-eating beasts? Double check.

For in the immortal words of Shaun of the Dead‘s Mum, they’re a bit bitey. These “zombies” are relentlessly new school (28 Days Later), not Romero’s boys, and you’ll find yourself looking for the coin-slot to add more credits, since this is more arcade game than movie: JailHouse of the Dead, perhaps? Plot and character development largely cease after about half an hour, and this does hurt things; why, for example, does a plague outbreak make the prison go dark? These logical elements are largely ignored, in favour of near non-stop entrail munching and head shots. However, given the title and cover, the latter are probably far more relevant to viewer satisfaction than any conventional aspects, despite some outstandingly bad metal songs at open and close. With a nod to Dizz Works Design for their sterling FX work, this is an unabashed gorehound-pleaser that delivers the gross-eries.