To be honest, I wasn’t planning on reviewing this. It just seemed like another competent, yet largely forgettable Netflix original. With a budget of $100 million, you know it’s going to be technically solid, and with long-time stunt coordinator Perry behind the camera, the action is certainly up to scratch. But it never managed to grasp my attention, and to be honest, I did doze off in the early going. Hence, I was going to pass on doing a write-up, until we got to the end credits, and… Scott Adkins? Wait, what? Why had I not been informed of this? Ok, now I am contractually obligated to cover it, as part of Project Adkins. 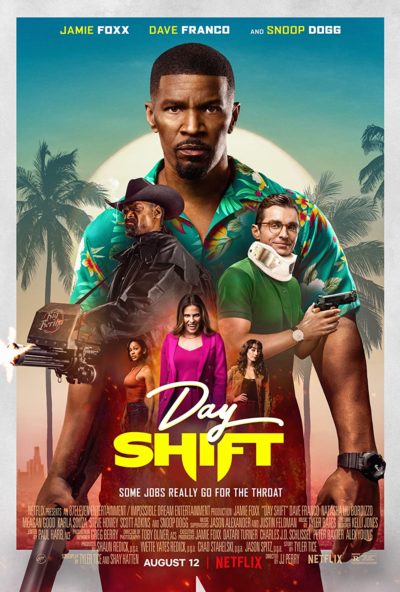 It’s a modern vampire story, with Bud Jablonski (Foxx) a hunter of these creatures in Los Angeles. Though his separated wife Jocelyn (Good) and daughter Paige think he’s a pool maintenance guy, and are about to move to Florida. To stop them, Bud needs come up with ten grand quick, and applies to rejoin the vampire hunters’ union, which kicked him out for dodgy work practices. He’s assigned a union monitor, Seth (Franco) to ensure compliance, but a bigger problem looms. The first victim we see him kill turns out to be a relative of powerful vampire, Audrey San Fernando (Souza). She vows to take revenge, and not just against Bud – Jocelyn and Paige are also in her cross-hairs.

At 114 minutes, it seems a bit long, and likely also a bit over-stuffed, with a few too many plot elements. The whole union thing is superfluous, and if it had taken Seth with it, since much the better. Much the same goes for the amusing, yet close to irrelevant, cameos by Peter Stormare and Snoop Dogg. Bud protecting his family is enough, on its own, to sustain a feature-length narrative. Which brings me to the presence of Mr. Adkins, who along with Steve Howey plays the Nazarian Brothers, rival hunters. They team up with Bud for a particularly tough mission, taking out a nest where multiple different kinds of vampires are living together. That’s the first indication something odd is going on, driven by Audrey’s plan to restore them to their previous position as deities worshipped by humanity.

It’s also probably the best action scene the film has to offer, an imaginative blizzard of carnage, helped by the insane flexibility of the vampire species. You have Bud and the Nazarians kicking ass in all manner of ways… while chocolate teapot Seth can’t figure out how to take the safety off his gun. Generally, when the film is in motion, it does a decent enough job of holding your attention. It’s when trying to do much else, such as progress the narrative or engage you emotionally, that it struggles, to varying degrees. Perry’s status as a rookie director may play into this, yet I’ve certainly seen worse debuts. Though it sure must be nice to start your career in that role with a nine-figure budget…