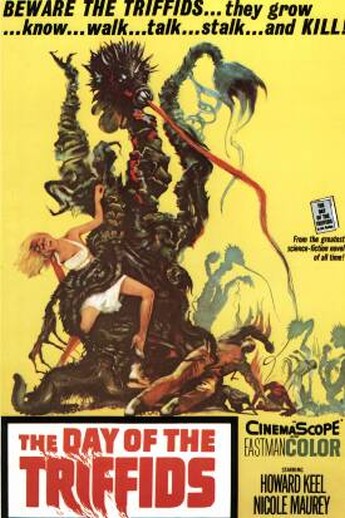 This 1962 adaptation of the classic John Wyndham story sees Keel surviving the disaster which blinds most of the population, and struggling across post-apocalyptic Europe, battling the titular evil flora on the way. Which is the problem: even discounting wobbly effects involving plants on trolleys, how threatening are creatures from which you can gently stroll away, where the only danger is dozing off in front of them? The film tries bravely to manipulate things e.g. cars getting stuck in mud, but is much better off depicting the anarchy, chaos and desolation. This it does with such grim determination, that the triffids are rendered of minor concern. From that angle, stick to the subplot involving an alcoholic marine scientist and his assistant, trapped in a lighthouse – you keep expecting this to join up with the main story, but it never does. Potentially ripe for a remake, I’d say.