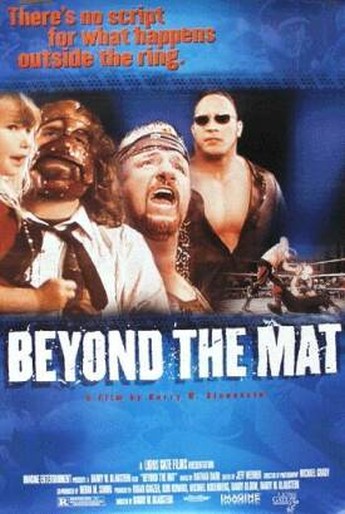 “They’re just like us, only different”. This documentary about the wrestling world and particularly, its effects on the lives of three wrestlers in different stages of their careers, is incredible. Wrestling for me was just a “fun evening of cathartic violence”, as my sweetie likes to put it. I always felt distanced from it because I didn’t understand much past the showmanship aspect. Barry Blaustein has been a wrestling fan since he was 8 years old. Thirty years later (and a few screenplays under his belt – Boomerang, Coming to America and The Nutty Professor) he takes a low-res video camera on the road, spending three years with Mick ‘Mankind’ Foley, Jake ‘The Snake’ Roberts and Terry Funk, each at a crossroads in their lives: Foley at the pinnacle of his career, Roberts trying to get out of the gutter, past the sad and tragic life he now regrets living and Funk, winding down his career. Each with their own gifts, and their own problems.

We are taken back into the bowels of the wrestling world, back to the beginning by way of indy APW’s School for Professional Wrestlers and how they aspire to swim with the big fish at the WWF. We are led behind the scenes at WWF headquarters, as their decision makers make (and break) careers. We sneak backstage and watch, wide-eyed, at the beautiful choreography that is wrestling and see, without a doubt, that it is not for the squeamish, nor the unfit. We also realize there is some extreme pain to experience, both physically, emotionally and mentally, as we see through the eyes of professional wrestlers and the life that they have chosen to live. For a brief moment, I was very moved by the sheer intensity of it all, and I left the theatre with a very healthy respect for the men and women who choose to call this their career…no, more than a career. For some it’s their entire lives.

For wrestling fans, this is a must see, and even for non-wrestling fans, it’s very eye-opening and interesting. Blaustein leads us into that complex world, and makes it simple to understand no matter where you are in the comprehension of what professional wrestling “means”. And I know that from now on, whenever I attend a wrestling event, I will cheer them, both good and bad. Because they all deserve it.