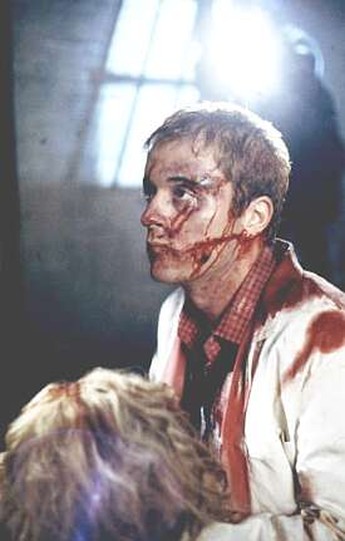 Coming out at a rate of about one per decade, the third part of the Herbert West saga sees the hero (well, our hero, anyway!) spending his 13th year in jail, quietly experimenting on rats, and he has found out how to stop his subjects from going berserk after being brought back from the grave. But the new prison doctor has a past and agenda of his own, as does the warden, and a pesky investigative journalist. For the first hour, this is saved only by Combs, no other actor coming close to the delightful mannerisms and self-assured insanity he embodies so effectively and effortlessly. The rest of the cast – and I can hardly believe I’m writing this – make you pine for Bruce Abbott. They’re simply that flat and uninteresting.

Luckily, the finale is much more lively, disgruntled corpses shambling around the rioting jail. It combines elements of the first two movies, with a resurrected authority figure forcing his attentions on the doctor’s girlfriend as in the original, and the S/M overtones of the second. We also discover what happens when you inject West’s re-animating fluid into a live subject, and it ain’t pretty. If all this action had started forty-five minutes earlier, we’d have a potential classic, instead of what feels like a missed opportunity – especially since the next installment will likely not appear until 2012. But we’re Combs fans, so a lead role, plus a rare “happy” ending for his character, is enough for us.