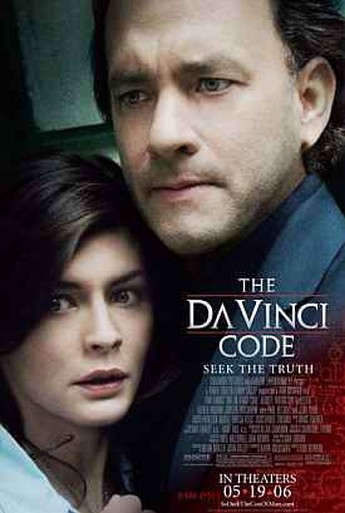 A secretive order preserving the location of the Holy Grail down through the millennia? A treasure-hunt from the Louvre to London to a chapel just outside Edinburgh? Mad albino monks with masochistic tendencies? This is, of course, complete bollocks. And, it’s not even very good complete bollocks at that, often grinding to a halt so that someone – historical symbolist Robert Langdon (Hanks) or Grail researcher Sir Leigh Teabing (McKellen) – can deliver a huge glob of exposition, in the manner of a college lecture or Powerpoint presentation; I kept expecting Al Gore to turn up and take over for a bit. It does have a couple of things going for it. Firstly, it isn’t National Treasure. Secondly, the actors do their best, even though this was dubious material as a book, and hasn’t exactly been improved by its transition to the screen. For instance, when Langon and his bit of French toast (Tautou) escape the police, they head to Paris’s most notorious red-light district, the Bois De Boulogne, evict a junkie from a park bench, and discuss history for a bit. What? The film is full of stuff like this: acts that make no sense.

Having both read the book and been aware of all the concepts on which its based, for a couple of decades prior to that, there was precious little excitement to be found here. I enjoyed the parade of recognizable faces in minor roles, and as noted, Hanks brings all his charisma to bear on the part. Both he and McKellen are just too good as actors to be defeated by a poor script, and they stop the film from collapsing under its own weight. That is a real threat, since it charges past two hours and keeps going, not least in a lengthy coda after all the really important threads have been tidied up. Can’t really see why the Catholic Church was so upset, at least not in its mainstream version (the Opus Dei sect, on the other hand…). After all, the litany of their sins covers a good deal worse than not giving Mary Magdalene her proper place in the gospels, and definitely deserves worse than a toothless savaging from a mediocre Hollywood adventure flick.