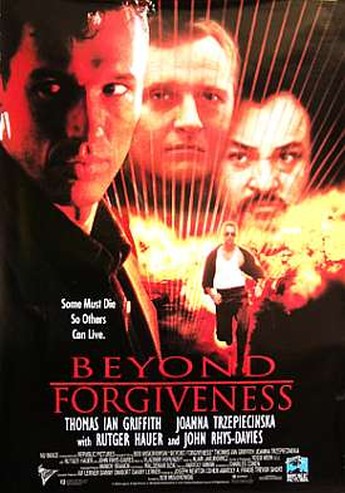 After his younger brother is killed by a trio of Polish hoods in Chicago, cop Frank Wusharsky (Griffith) heads off to his native land to track down the survivor and bring him to justice. The local police are not exactly impressed by the fire-fight and mass destruction which Frank unleashes at a local market as part of his “investigation”, and would rather he didn’t rock the boat with the Russian gangsters who largely control the town. The reason for this is not just a desire for peace quiet, and fewer gun-battles. Frank discovers some of the local force are rather too cosy with the gangsters, though he gets help from Shmuda (Rhys-Davies). While he falls for local lady Anna (Trzepiecinska), she also finds that her father, renowned surgeon Dr. Lem (Hauer), may be involved in some seriously shady practices, involving the extraction of organs from donors who don’t actually fulfil the necessary minimum criteria i.e. aren’t dead yet. Time for American to clean up the world’s messes, yet again…

The known names in the cast are competent enough, and have enough experience in this kind of direct-to-video nonsense that they don’t embarrass themselves with their performances. However, outside of the Polish locations, which add a certain exotic flavour to proceedings, this is extremely pedestrian stuff, with very little in the way of surprises: we were predicting some of the precise camera shots before Misiorowski used them. Apart from that, it’s likely to our eternal shame that we spent a great deal of the film cracking entirely unwarranted Polish jokes. Actually, just repeating the same one and changing the subject: “Oh, look, it’s a Polish ______ [gun, towel, prostitute, etc.] You can tell because it has ‘THIS WAY UP’ stamped on it”. I would like to apologize to the fine people of that country for these unwarranted slurs. However, I think Misiorowski also needs to apologize for making such a severely mediocre film, that the viewing audience needs to create its own entertainment to get through the humdrum action sequences.